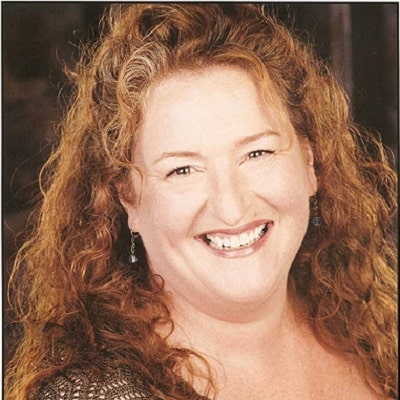 Rusty Schwimmer might be currently living her single life. Due to her secretive nature, it is hard to predict her relationship status and affair.

Also, she has not been linked with any other in the past and hence, it is quite challenging to claim whether she is still single or already married.

Who is Rusty Schwimmer?

Rusty Schwimmer is an American actress and singer who is best recognized for her role of Barbara Ludzinski on ‘The Guardian’.

She was born on August 25, 1962, in Chicago, Illinois, the United States. Rusty will turn 59 years old this August. Her birth sign is Virgo.

However, Rusty has not revealed her parents’ identity as well as siblings information. Besides, she loved theater, music since her childhood.

Moving towards her education history, she attended New Trier High School in Winnetka, Illinois with her best friend, Virginia Madsen.

While in high school, she was a big fan of Chicago Cubs, Chicago Bears and Chicago Bulls.

She made her acting debut from the film ‘Memories of Me’ in 1988. Also, she portrayed small roles in ‘Highlander II: The Quickening’, ‘Sleepwalkers’ and ‘Candyman’.

Then, she appeared as Joey B in ‘Jason Goes to Hell: The Final Friday’ in 1993. In addition, she depicted the character of Amelia Minchin in ‘A Little Princess’ in 1995 and then appeared as Mrs. Thornton in ‘Twister’ released in 1996.

Moreover, she portrayed the recurring role on the CBS legal drama called ‘The Guardian’. Her other notable guest appearances include in Parker Lewis Can’t Lose, In the Heat of the Night, The Fresh Prince of Bel-Air, Tales from the Crypt, Gilmore Girls, CSI: Crime Scene Investigation, Criminal Minds, Private Practice, Heroes, Desperate Housewives, Six Feet Under, Lucifer, Grey’s Anatomy, and many more.

She won Jury Award in the category Best Narrative feature in ‘The Life and Death of an Unhappily Married Man’ in 2016. Also, she won Best Actress Award for ‘Wild Honey’ in 2018.

She has an estimated net worth of around $100K and she has earned that sum of money from her professional career.

Schwimmer does not like to get involved in any rumors and controversies in her personal and professional life.

She has a height of 5 ft. 5 inches and weighs average. Also, Rusty has hazel eyes and reddish hair. But other information about her body measurement, shoe size, dress size, etc.a re not available.