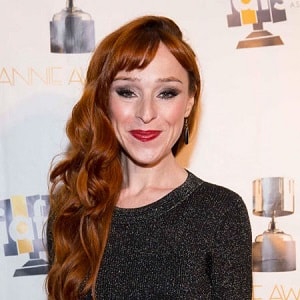 “That anxiety is never going to go away. You just get better at getting past it.”

Ruth Connell has maintained her personal life totally secret. However, according to some sources, she is having an affair with Supernatural star, Misha Collins. However, both have not made their relationship public.

But they are seen together in many events. Looking at their chemistry, they definitely seem to have something between them.

Who is Ruth Connell?

Ruth Connell is a Scottish television, theatre, and film producer and actress, dancer and choreographer. She has been nominated for her role as Rowena in the series Supernatural.

Her father is a football manager and coach while her mother is a teacher. She was brought up near her father’s farm, Bonny bridge. Ruth holds dual nationality, Scottish and British citizenship and her ethnicity is a mix of British and Scottish.

She was sent to ballet classes during her childhood along with her cousins and she performed in Scottish Ballet.

Moreover, during her early years, she was she took part in plays in Ballet and was once featured in The Nutcracker as Clara.

She trained dancing during her early age in the Scottish Ballets Vocational Dance Education Scheme. She won Scottish Junior Ballet Champion and Scottish Senior Ballet Champion in Scotland. She attended the Rose Bruford College of Speech and Drama and achieved a BA (HONS) Acting in London.

Ruth’ official debut was in the legendary, Soldiers Leap. However, her role was a short one.

In 2004, she played the lead role of Grusha in ‘The Caucasian Chalk Circle’, that toured for The Palace Theater, Watford. Ruth also portrayed the leading role in Faust at the Royal Lyceum Theater in 2006 as a Gretchen and Helen of Troy.

She was featured as a ballroom dancer in 2007 at the Citizens Theater’s sell-out production of Alex Norton’s ‘No Mean City’. The following year, she played the double role of Mrs. Beaver/Mrs. Mcready’ in ‘The Lion, the Witch and the Wardrobe’ at the Royal Lyceum Edinburgh.

Ruth is also the producer of the movies like ‘A Midsummer Night’s Dream’ and ‘Hansel and Gretel’ at the Avenue Theater Company and of the films ‘Sapphire Strange’ and web series ‘John and Jane’.

She portrayed different roles as well as leading roles after she moved to the US in 2011. Some of the films are ‘Folklore’, ‘The Cursed Man’, ‘Kiri’. Since 2014, she has been playing as Rowena, in the series ‘Supernatural’ starting in season 10.

She has been nominated for the Best Leading actress in Broadway World Los Angeles Awards at the Black Theatre, L.A. in 2013.

Ruth Connell: Net Worth and Salary

According to the sources, it is estimated that she has a net worth of around $500,000 and she has earned that sum of money through her acting career and dancing career.

People use to relate her as a Lesbian but she has denied the fact. Also, there are rumors that she was married to her co-star Mark Sheppard in real life as well. But the truth is they did not get married, those rumors were false and she is single yet.