Ruth Kearney is an actress who latest appeared in Netflix series, Flaked. She is married to an actor Theo James. 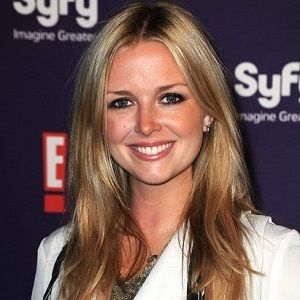 There are so many actors who you never see in paparazzi pictures.

I think it only changes if you want it to. You can go to every party and buy into that lifestyle, but if I continue to lead the life I'm living then I don't think anything has to change.

I love the outdoorsy nature of LA and I always feel like I'm in better shape here. I do lots of hikes. Runyon Canyon is great for people-watching.

You can live a normal life - it's the choices you make.

Ruth married Theo James on 25th August in Islington Town Hall, London, England. Theo is an English actor. They met at the Bristol Old Vic Theatre School and were engaged in 2015.

They dated from 2009 and now couldn’t have been happier.

Who is Ruth Kearney?

Ruth Kearney is an Irish actress. She rose to fame for her role as Jessica ‘Jess’ Parker’ in the 2010 series Primeval. Some of her notable works include as Daisy in The Following, and London in the Netflix series Flaked.

Additionally, she has also guest appearance Daisy in The Following, and London in Flaked.

Ruth was born on November 11, 1984, Dublin, the Republic of Ireland to Irish parents. When she was five years old, they relocated to Dublin, Ireland.

Kearney’s parents are divorced and her father remarried a woman from California and lives in Santa Barbara. Her mother resides in Switzerland, might migrate to London.

She has elder sisters, who live in London.

She attended St. Andrew’s College, Blackrock and then studied Drama and Classics at Trinity College, Dublin and graduated with honors.

Then finally in 2009, she graduated from the Bristol Old Vic Theatre School, King Street, Bristol, England.

Her career began in theatre, with performances in productions such as Man of Mode alongside Antonia Thomas and Theo James, On the Razzle, Three Sisters, Oh! What a lovely War! and Othello.

A year later, she landed the role of Jessica ‘Jess’ Parker in the web series “Primeval”. In 2011, she appeared in three different roles in three TV series and TV movies.

She redefined the role of Jessica ‘Jess’ Parker in the web series “Primeval” followed by Jenny Proctor in “Holby City” and Stacey in Fast Freddie, The Widow and Me. Additionally, she has also guest appearance Daisy in The Following, and London in Flaked.

Back in 2013, she starred as Angel in the television movie Jet Stream. Some of her other roles are Katharina in “Tyrant” and Becca Morgan in “Get Shorty”.

Her salary and net worth are calculated at $51,000 per year and $2 million respectively.

Ruth Kearney is active on Instagram on which she has almost 19.5k followers.