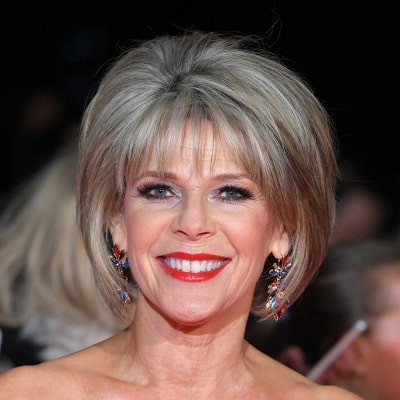 Ruth Langsford is a married woman. She is married to Eamonn Holmes on June 26, 2010, at Elvetham Hall, Hartley Wintney, Hampshire. Her husband is also her co-host for the daytime show This Morning.

They started dating in 1999. In 2002, Ruth gave birth to their son Jack Alexander Holmes. After their live announcement of engagement on The Morning Show.

The family currently resides in Weybridge, Surrey, England with their dog Maggie, which they adopted in 2011 from the charity Dogs Trust.

Who is Ruth Langsford?

Ruth Langsford is a famous English television presenter who is best known for presenting shows which includes ‘Gift Wrapped’, ‘The Morning’, and ‘How the Other Lives’.

She was born on 17 March 1960 in Singapore. Her birth name is Ruth Wendy Langsford. Her mother’s name is Joan Langsford and father’s name is Dennis Langsford, who used to work in the military. She had a sister named Julia Johnson.

Her family used to travel a lot which had a good impact on Ruth. So by the age of 10, Ruth had already lived in 5 different countries, including Germany where she spent her teenage years.

Ruth holds British citizenship but her ethnicity is unknown.

She joined Saltash School which is located in Cornwall form the year 1977 to 1978.

Ruth started her carer as a continuity announcer and newscaster with Television South West (TSW) in England and worked there till early 1993. She worked as a regular panelist on the show Loose Women from 1999 to 2002. She rejoined the show in 2010.

In 2000, she started to work as a guest presenter and as a regular presenter on the show This Morning in 2006

EAMONN Holmes shared an emotional tribute to her as she returned to host This Morning today after her sister’s death.

She is also an ambassador for Alzheimer’s Society and appeared in a Dementia Friends TV advertisement campaign in 2014 to raise awareness about Alzheimer’s disease.

It seems Langsford has not been awarded and nominated for her work till date. Hope, she will win in the future.

Langsford has not been involved in any rumors and controversies in her personal and professional life.

Tags : ‘The Morning' English television presenter How the Other Lives
Suggest Bio Update