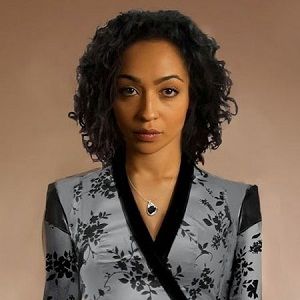 I like connecting with people, and that's what good art is, a point of connection. There's nothing better, on stage or on film than feeling like you've achieved that.

I grew up in a lot of different places, so I pick up accents pretty quickly.

Ruth was in a relationship with actor Dominic Cooper whom she met while working in a stage adaptation of Phedre. They began dating in 2009 and moved in together in London in 2010. They were in a relationship for 9 years before parting ways in April 2018.

Who is Ruth Negga?

Ruth Negga is an Ethiopian- Irish actress. She is recognized for her television roles in Marvel’s Agents of S.H.I.E.L.D. and Preacher, and for her film roles in Warcraft and Loving.

Ruth is an only child to Ethiopian father Dr. Nigga and Irish mother Norra Negga. She lost her father in a car accident when she was 7 years old. Until age 4 she lived in Ethiopia and then moved to Limerick, Ireland due to break out of political violence.

She attended Trinity College of Dublin graduating in BA in acting studies. Later she moved to London in 2006 to garner her acting skills in National Theater.

Ruth had been working in theater before her debut. Her debut was in Irish film Capital Letters in 2004 where she played the lead role of Taiwo. After seeing Negga’s work, director Neil Jordan changed the script to Breakfast on Pluto to include Ruth in the movie. Here she played a pregnant girlfriend to an IRA terrorist which became her breakthrough role in 2005.

Her work in Doctors, Criminal Justice and in BBC2’s biopic of Shirley Bassey got her fame. She won IFTA Award for Best Actress for her role in the biopic. She has appeared in major projects like Twelve Years a Slave (2013), World War Z (2013), and Warcraft (2016).

Her most promising role to date is considered to be the character Mildred Loving in Jeff Nichols’ Loving (2016). The film is based on the true story that led to the historic 1967 anti-discrimination ruling by the Supreme Court. She appeared as Raina in ABC’s popular show Marvel’s Agents of S.H.I.E.L.D. Currently, she is playing the ruthless Tulip O’Hare on AMC’s Preacher.

Ruth’s net worth is estimated to be $4 million.

Being a very private person Ruth doesn’t have any rumors. she also hasn’t been in any kind of controversies with other celebrities.

Quoted saying “Instagram and Twitter, I don’t engage with any of it—it terrifies the s— out of me,” in her cover story for The Edit Ruth is absent from all social media platforms. She is not even on Facebook.

Also read the biography of the actor, Dominic Cooper