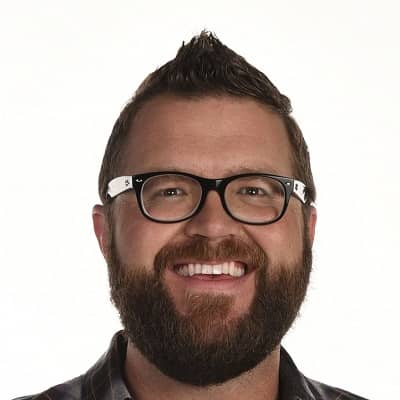 Rutledge Wood is a married man. He married his wife, Rachel. Moreover, they had been together for more than 15 years. Currently, they are enjoying each other’s time and there are no rumors of divorce. The couple seems to be happy and cute together.

They are blessed with three daughters, Elsie, Millie, and the youngest one, Hattie.

Who is Rutledge Wood?

Rutledge Wood is an American analyst, commentator, and host for Netflix show Floor Is Lava and The American Barbecue Showdown.

Furthermore, he has been covering auto racing and was also a host for several other shows.

Rutledge Wood was born on April 22, 1980, in Birmingham, Alabama, United States. Currently, he is 41 years old.

His parents are Claudia Wood and Bill Wood. His father used to buy, restore and sell vehicles. Watching his father, he grew passionate about cars and motorsports at an early age. At the age of 15, he moved to Peachtree City, Georgia to further his studies. Besides this, he has not talked much about his childhood.

He is of American nationality and his ethnicity is not known. His birth sign is Taurus. Talking about his education, he was enrolled at McIntosh High School. Later he graduated from the University of Georgia.

Rutledge Wood’s career began soon after graduating from college. In 2007, he hosted the Speed Road Tour Challenge. On November 21, 2010, he was one of the three hosts for History’s Top Gear along with Adam Ferrara and Tanner Foust.

He has been the host of the Netflix show Floor Is Lava since June 2020. Besides this, he was one of the hosts for NASCAR Trackside. In 2013, he won the 2013 Long Beach Toyota Celebrity Race with Adam Carolla under the category of a pro. In 2014, he started a project for the fifth season of Top Gear. Again, he appeared in the show, Lost in Transmission as the host of the show.

Currently, he is hosting the Netflix show, The American Barbecue Showdown, which launched in September 2020.

Of all his illustrious career, he has an estimated net worth of $3 million.

There are no rumors and controversies about Rutledge.

Wood has beautiful regular brown hair and black eyes. He stands 5 feet and 7 inches tall and weighs moderate. However, there is not much information on his weight and other body measurements such as shoe size and dress size.