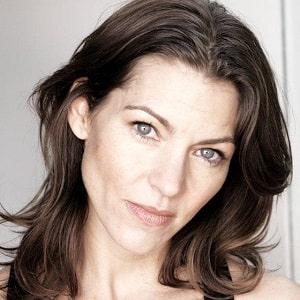 Rya Kihlstedt has been married to Gil Bellows on October 3, 1994. They first met in 1991 while both were walking at the Williamstown Theatre Festival. They have welcomed a daughter on April 4, 1999, and named her Ava Emanuelle and a son in 2001 and named him as Giovanni.

Who is Rya Kihlstedt?

Rya Kihlstedt is an American actress and she is best known for co-starring in the 1997 comedy film ‘Home Alone 3’ and her role as Dr. Michelle Ross in the Showtime crime drama ‘Dexter’ and as Marilyn Rhodes in ‘Nashville’.

She was born on July 23, 1970, in Lancaster, Pennsylvania, U.S. She has a birth sign, Leo. Rya holds American citizenship and she is of Swedish descent. She has not revealed other information regarding her family and childhood.

She was graduated from Skidmore College in Theatre Arts in 1991. Also, she was a graduate of J.P. McCaskey High School, Lancaster, Pennsylvania.

She debuted as Lizzie Elmsworth in the novel, ‘The Buccaneers’ in 1995. But, she is famous for her role as Alice Robbins in the comedy ‘Home Alone 3’ in 1997. She starred with Peter Gallagher in 1998 in the TV movie ‘Brave New World’ which is loosely based on Aldous Huxley’s 1932 novel of the same name.

She portrayed the recurring role of Dr. Michelle Ross in the Showtime crime drama ‘Dexter’ and as Marilyn Rhodes in the ABC musical drama ‘Nashville’. She starred as Erica Kravid in the NBC sci-fiction drama miniseries ‘Heroes Reborn’ from 2015 to 2016. She portrayed the role of Tig Notaro’s mother in the Amazon Video series ‘One Mississippi’ in 2016.

Rya Kihlstedt: Net Worth and Salary

It is estimated that she has a net worth of $1 million and her main source of income is from her professional life.

She has been successful in keeping her information secret. She has not been involved in rumor and controversies in her private and professional life.