Ryan is now married to Arlo DiCristina. Arlo is also a tattoo artist.

They both met each other in November 2018. She has shared about their relationship, pregnancy journey on the covers of Inked magazine.

The couple was also featured as a couple in January 2019’s issue of Inked magazine. They married in a private ceremony in Colorado in the fall of 2019.

The pair has a son named Atheus DiCristina born in May 2020.

Ryan was in a relationship with Joshua Balz aka Josh Balz in the past. The couple started dating in 2013.

They even started their shop and co-owned “The Strange and Unusual Oddities”. The pair also got engaged in March 2016. In the year 2017, they broke up and walk their separate ways. 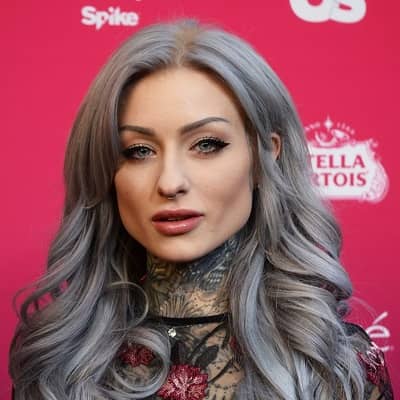 Who is Ryan Ashley Malarkey?

Ryan Ashley Malarkey is an American tattoo artist. She is popular for being the winner of Season 8 of Ink Master and its spin-offs.

She is now the owner of Strange & Unusual Oddities Parlors.

Ryan was born on April 29, 1987. Her birthplace is Kingston, Pennsylvania, United States.

Her mother’s name is Diane Green. Ryan was influenced into tattoos by her mother who is also an artist. She claims to have learned a lot from her mother. However, the information about her father is unknown.

Ryan’s nationality is American and her ethnicity is Caucasian.

Ryan has her degree in fashion design from the Fashion Institute of Technology in the year 2007. Moreover, she was also named the Critic’s Choice award winner of her graduating class.

Returning to Pennsylvania, Ryan wanted to be a tattoo artist. She previously has worked at a tattoo parlor through various appointments, takes walk-in clients, and gained experience.

Along with her friend she opened a parlor The Strange and Unusual Oddities in the year 2013. She used to design tattoos from the backside shop. Likely various collection of objects, restored antiques, and taxidermy was sold in the front.
With taxidermist business partners both of them opened a second shop in Philadelphia. They have Rock musicians like Ash Costello and Maria Brink as their clients.

The artist came into popularity after appearing and also winning the Ink Master season eight competition in 2017. Then for the following three years, she hosted two seasons of a spin-off show.

Moreover, Ryan served as a judge in another spin-off Grudge Match. She has also featured as the cover in January 2019 in the Inked Magazine.

The artist has also received various awards at many Tattoo Expos. Her tattoos are specialized in black and grey designs with lace detail, ornamental jewels, and beadwork.

Ryan has amassed a net worth of around $1 million as of 2022. She earned from the show Ink Master and also likely won various tattoo competitions.

Moreover, she owns two tattoo shops. Likely, she makes hundreds an hour per tattoo and takes $200 even for the smallest of tattoos.

The artist maintains a low profile when it comes to her personal life. And it’s the reason she has been out of any such rumors or controversial news.

The artist has a perfect figure with a measurement of 26-35-36 inches. She has an average height of 5 ft 11 inches and weighs around 60 kg.

Similarly, she has natural brown blonde colored hair which she usually dyes into platinum blond. Likewise, her eye color is grey.