Ryan Ferguson is an American man. As for Ferguson's personal life, he has been in a relationship with Fox Weather meteorologist

As for Ferguson’s personal life, he has been in a relationship with Fox Weather meteorologist Brigit Mahoney for a few years now. In mid-December 2020, Mahoney posted a photo of the pair kissing at sunset while out at sea which confirmed their togetherness.

Ryan started dating his current girlfriend after breaking up with longtime girlfriend Myka Cain. Cain and Ryan fell in love while he was in jail around 2012. They appeared together for a while after Ryan’s release. But that was all, and the reason for their break remains unclear. 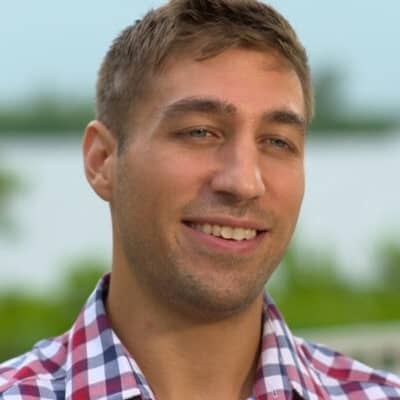 Who is Ryan Ferguson?

Ryan Ferguson is an American man who spent about a decade in prison for a 2001 murder in his hometown of Columbia, Missouri. The cops arrested Ferguson, a 17-year-old high-school student, and Charles Erickson for murdering Kent Heitholt.

Meanwhile, in 2014 Ferguson received $13 M for defamation along with his bailment. The public applauds his efforts of reaching out to innocent prisoners like him. This guy exemplifies how one can stay motivated in prison when one is not guilty.

Ryan is running Prison Counts podcast with his friend from prison Dave Dowling. In the podcast series, interviews from prisoners, investigators, wardens, lawyers, and cops can be found all together.

On October 19, 1984, in Northern Territory, Australia Ryan was born. His birth sign is Libra. He belongs to the Caucasian ethnicity.

His family members are his mother Leslie Ferguson and his father Bill Ferguson. Also, he has a sister Kylie Ferguson. For reference to his educational background,  he was studying at Missouri College.

Talking about Ryan’s build, he is 1.97 m tall and weighs around 91 kg. Since the day, he was in prison he focused on his bodybuilding. Not to deny, he was in the best shape of his life in prison.

Describing his facial features, he has light brown hair and grey eyes. He has thick eyebrows.

In April 2016, Ferguson started to host an MTV series entitled Unlocking the Truth, a serialized documentary following other cases of possible wrongful conviction.

As previously stated, he also runs the podcast Prison Counts, and currently, 4 episodes are launched. The main motto is to expose the harsh reality of life in prison and brief the operation of the criminal justice system. Not only that, their goal is to give a voice to the voiceless.

After Ferguson was imprisoned, he started to devote his time to fitness and health. He began exercising and lifting weights while in prison thus, becoming a certified personal trainer.

His father inspired him a lot when he was in prison stating that he could not protect him inside prison. Thus, he has to be strong himself.

In the early morning around 2 a.m. on November 1, 2001, the incident happened. There was a dead body of sports editor, Kent Heitholt Columbia Daily Tribune. Reportedly, someone has abused and strangled him in the parking lot.

Heitholt’s murder mystery was unsolved for two years. One day, police received a tip about a man named Charles Erickson who had spent that evening partying with Ferguson.

Erickson being intoxicated could not remember the evening of the murder. But also, he was concerned about the incident. Although Erickson failed to recall if he killed Heitholt, he eventually confessed and implicated Ferguson in the crime as well.

Not only Erickson’s testimony but also building employee convicted Ferguson, in the fall of 2005.

Charles Erickson is the one who involved Ferguson in the murder. He remained imprisoned for the crime and is serving a 25-year sentence in exchange for testimony against Ferguson.

Erickson also filed an appeal in December 2018, which the court denied because he had already confessed to the crime. In June 2020, Erickson filed for a rehearing.

On March 11, 2014, Ferguson filed a civil suit against 11 individuals against the criminal justice system. The conviction was overturned and Ferguson was released. He received $13 M in exchange for his wrongful conviction.

According to previous KOMU 8 reporting, Erickson currently has a parole date set for 2023.

His estimated net worth is around $5M -$ 11 M as per 2022’s data. His exact net worth details are not available. Eventually, his per-year pay is also unknown.

Though, he is not active on Youtube several videos of his interview and case explanation appear after typing his name.