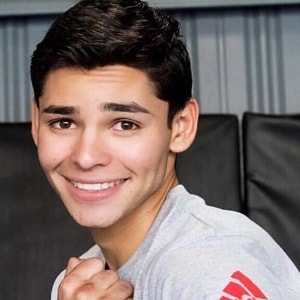 I’m always going to shout out Selena Gomez, I know she’s probably not looking for a man right now, but I would protect you! She’s single so let me shoot my shot…let me take you out!

What is the relationship of Ryan Garcia?

Ryan Garcia is currently according to rumors, is in a relationship with Andrea Celina. Ryan posted a picture of him and Andrea on his Instagram account on the 23rd of July. The pair seem to enjoy together at an event.

Before Andrea, Ryan was in a relationship with a girl named Catherina and have a baby daughter named Rylie. They aren’t together and have no hard feelings for each other.

And get this, in an interview, he told that he would like to date an American singer, Selena Gomez and she also admires him back.

Who is Ryan Garcia?

Ryan Garcia is an American professional boxer who competes in the Super Featherweight division. He is famous for his affiliation with Golden Boy Promotions.

He has been unbeaten in his career since 2016.

He was born on August 8, 1998, in Victorville, California, USA. He is currently 23 years old. His father’s name is Henry Garcia and his mother’s name is Lisa Garcia.

His father had a dream to become a boxer like Ryan’s uncle, Sergio Garcia but ended up becoming a trainer.

Henry trained Ryan from the age of 7 along with his younger son, Sean Garcia, and Ryan’s best friend, Lawrence The Dawg King. Ryan’s mother works as his Personal Administrative Assistant for commercial projects.

Ryan has 4 siblings together and three of them are younger sisters and the other is his younger brother.

He Always carries the US and Mexican flags into the ring. And wears red, white, and blue colors frequently. He holds American citizenship and his ethnicity is Mexican.

Ryan Garcia debuted his professional boxing carer on June 9, 2016, in a fight against Edgar Meza at Tijuana, Baja, California, and won in the first round following a TKO.

He has a contract with Oscar De La Hoya’s Golden Boy Promotions in 2016. He came in the second position at the 2014 Junior Worlds event. Ryan is currently rated as the 24th of 1478 in the world. The 20 years old boxer currently ranks 4th of 174 in the USA and he has won 13 matches of his 16 matches by knockouts.

He fought with Carlos Morales on September 1, 2017, and knocked him out in less than 30 seconds. And, he made his victory after the 10th round by major decision but the match was described as lackluster by many people as the match did not meet up to the hype it has created.

He is the winner of Silber gloves, National Pals, Junior Golden Gloves, and Junior Olympics.

As per 2022’s data, his net worth at around $10 million earned from his boxing career.

Is Ryan Garcia involved in any rumors and controversies?

In the middleweight outboxing championship between Canelo Alvarez and Daniel Jacobs, Canelo won the belt. To Ryan was with Canelo and stated that Daniel lost because of his off-balance.

This young boxer is concentrating on his career and wasn’t surrounded by any rumors or controversies.

How tall is Ryan Garcia?

Ryan Garcia has a height of 5 ft. 10 inches and he weighs 70 kg. Also, he has light brown hair and light brown eyes.

To know more about Anthony Crolla, Tony Bellew, and Alex Ramos, please click on the link.