Ryan Giggs is Welsh football coach. He had multiple relationships in the past. He also had an extramarital relationship with his brother Rhodri's wife Natasha. He is now dating DJ Helen Stelling Holt.

Ryan Giggs is dating a DJ plus model Helen Stelling Holt since early 2019. They met at the Old Trafford stadium in Manchester.

Previously, he was in a relationship with several women during his career. Although he was a married person, he had an affair with Natasha Giggs (Brother Rhodri’s wife) and Imogen Thomas during his married life.

He married Stacey Cooke,  his childhood friend, and long-time girlfriend, in 2007.

They have two children Zachary Joseph Giggs and Liberty Beau Giggs. In 2017, they separated following the news of Ryan being caught with another woman.

Ryan has also an affair with Emma Gardner from 1996-to 2001 when Emma got pregnant and miscarried her baby.

They were rumored to get married but later Ryan dumped her. His name was also linked up with others like Dani Behr, Patsy Kensit, and Davinia Taylor. 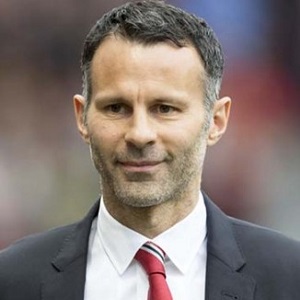 Too much money at a young age, it just takes your eye off the ball. And you're not as hungry as players used to be. You think you've made it before you've done anything

As players, you just play for the club. I love Man United, I'm going to play for Man United, and that's what my focus is on.

Who is Ryan Giggs?

Ryan Giggs is a former Welsh football player and now serves as a Coach. He previously played for Manchester United for 24 years.

Giggs has also named the PFA young player in the consecutive two seasons in 1992 and 1993.

He was born on 29 November 1973, in Canton, Cardiff, Wales as Ryan Joseph Wilson.

His father Danny Wilson was a rugby league player and his mother Lynne Giggs was a housewife. They separated when Giggs was 16 and he began to live with his mother.

Giggs’s younger brother, Rhodri was a manager of Salford City. At the age of six, his parents shifted to Manchester after his father joined Swinton RLFC.

Giggs faced a lot of racism in his childhood because of his mixed ethnicity of Sierra Leonean (African), and Welsh.

He has completed his high school at Moorside High School, Swinton.

Ryan Giggs’s first season wasn’t so good, where he just appeared as a substitute. But in 1992 he grabbed the trophy as a League Cup title. With the help of Eric Cantona, Manchester United won a double where Giggs was one of the main players in the season.

Ryan as a teenager was a spectacular player of his generation and popular as well that he started his own show named Ryan Giggs’ Soccer Skills in 1994.  At that time Ryan Giggs was everyone’s topic in the football world. Even the United great Sir Bobby Charlton praised him saying, “One day they might even say that I was another Ryan Giggs.”

Ryan’s magical spell continued as he was crowned as PFA Young Player of the Year awards in two consecutive seasons, which his fellow United player Wayne Rooney has also achieved winning two times. Despite becoming an emerging player he was ruled out from 29 matches in 1994-1995 with an only goal in his name.

However, in the 1995-1996 season, he came stronger than before and helped his team win the second double. Giggs became the only second player to win the FA Cup. In 2005, Giggs signed a new contract with the Reds and stayed for two years.

On 19 May 2014, Ryan Giggs made the announcement of his retirement after playing at Old Trafford for almost 24 years.

On 4 July 2013, Giggs was appointed as a player-coach at Manchester United under David Moyes. After Moyes was replaced by Louis Van Gaal, Giggs remained as the assistant manager and served his team for one more season. Ryan Giggs called it quit when Jose Mourinho was appointed as a new manager on 2 July 2016.

He has also featured in the documentary film The Class of 92, as himself. In his career at Manchester United, he has lifted every trophy possible for his side. He has been awarded PFA young player of the year twice. He has also been titled an OBE (Officer of the Order of the British Empire).

Ryan Giggs: Net Worth and Salary

This player’s net worth is estimated at around $60 million. Ryan has also been associated with brands like Fuji, Phillippe, Givenchy, Citizen Watch, and more.

He has a luxurious mansion in Manchester which he bought in 2004 for £1.9 million, which now costs nearly £4 million. Giggs also owned various cars such as Bentley Continental, Porsche, Audi, and a couple of others.

As per the sources, the average salary received by a football coach is around $42k per year.

Ryan Giggs was one of those players that new players admired to become. But his personal life is the opposite compared to his professional life, where he faced many criticisms and was dragged into many controversies.

Moreover, she explained that she has aborted their baby before she got married to Rhodri. Ryan has also tried to keep her silent by spending £150,000 but it terribly failed. Later Ryan apologizes to his brother.

Ryan Giggs has an athletic body with a height of 5 ft 10 inches and weighs 72 kg.

He has dark brown hair and a dark brown eye. He has a physique with 38 inches chest and 13 inches biceps.

Ryan is active on social networking sites. He has more than around 106k on Twitter and over 27k on Facebook.

Patrice Evra returned to the English Premier League as he joined West Ham United on a free transfer after being sacked from the Ligue 1 side Marseille.