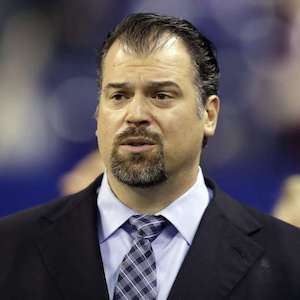 Ryan Grigson and Cynthia are the parents of Six children

Ryan Grigson is a married man. He is married to his longtime girlfriend, Cynthia.

He met his wife while they were studying at Pardue University. The couple began since then and married in 2001. The couple has six children.

There are no more personal details about this couple, However, Grigson and Cynthia are happily married couple with 6 children.

Who is Ryan Grigson?

Ryan Grigson is an American football Senior Personnel Executive for the Cleveland Browns of the National Football League (NFL).

From 2012 to 2016, he served as the general manager of the Indianapolis Colts.

He was born to Jeff and Juanita (Rokita) Grigson in 1972. Jeff Grigson (d. 1980) had played college football at Northwest Missouri State University. He has a brother, Dru Grigson.

As a sophomore, he was a member of the Trojan team that played in the 1987 5A State Championship game at the Colt’s original stadium, the Hoosier Dome (RCA Dome).

Ryan Grigson playing career, Grigson signed his letter of intent to play College football for the Purdue Boilermakers in 1990, where he would play from 1990 to 1994.

ON October 10, 1992, in a game against Minnesota, he was hit in the abdomen by a defender and sustained a life-threatening injury.

Ryan was hospitalized immediately after and the blow resulted in pancreatitis, kidney failure, and pneumonia.

He missed the rest of the season, likely or never play again, after becoming a starter during his sophomore year. Grigson returned for the 1993 season, started ten games and was named one of three captains, along with Mike Alstott and Matt Kingsbury, for the 1994 season (Purdue’s first winning season in a decade).

Towards Grigson’s professional; Grigson was drafted by the Cincinnati Bengals in the sixth round (175th overall) of the 1995 NFL Draft.

He was signed to a contract by the Bengals on June 10, 1995, but was waived during final cuts on August 28. He was signed by the Detroit Lions shortly thereafter and spent the 1995 season with the team.

He was released by the Lions on August 14, 1996. Grigson played for the Toronto Argonauts of the Canadian Football league in 1997 before he suffered a career-ending back injury and was forced to retire.

Grigson Executive and coaching career, Early career, Following his retirement, he became a pro scout for the Saskatchewan Roughriders in 1998.

Grigson Nation Football League Career, he was hired by the St. Louis Rams as a national scout in 1999. He was part of the Rams’ Super Bowl XXXIV championship team and the Rams’ NFC Championship super Bowl XXXVI team in 2001 as an area scout.

On May 15, 2004, Grigson was hired by the Philadelphia Eagles as a western regional scout.

After the 2012 season, which put the Colts back in NFL Playoffs with an 11-5 record, the nine-win improvement from the previous year tied the third-largest improvement in league history.

Thanks to this turnaround, which included changing 70% of the roster, he earned Executive of the year honors from Sporting News and Pro Football Weekly.

He also won the 2013 Drew Brees Mental Toughness Award from the Northwest Indiana Chapter of the National Football Foundation. On September 18, 2013, Ryan Grigson traded a 2014 first-round draft pick for Trent Richardson. The Colts were looking for a running back after a season-ending injury to Vick Ballard. Richardson was released following the 2014 NFL season.

On January 11, 2015-Grigson’s third anniversary with the team the Indianapolis Colts beat the Denver Broncos to qualify for the AFC Championship game against the New England Patriots.

During the AFC championship, he asked NFL officials to check the Patriots’ balls, which set in motion the “Deflategate” scandal. The Colts lost the game 45-7.

The Colts, who struggled with injuries including one to quarterback Andrew Luck, stumbled in the 2015 season and finished 8-8 out of the playoffs.

They did, however, manage to set the NFL record for the longest winning streak against any division in the league with their 16th consecutive victory over an AFC South opponent when they beat the Houston Texans during Week 5.

The record surpassed the previous mark of 15, recorded by the Super Bowl Champion Miami Dolphins against the AFC East during the perfect season of 1972 and into the following season. On Jan. 4, 2016, The Colts announced that Ryan Grigson and head coach Chuck Pagano had both received contract extensions through the 2019 season.

On January 21, 2017, Grigson was relieved of his duties as general manager.

One move that made many questions Grigson was the infamous Trent Richardson deal that lost the Colt a first-round draft pick. While at the time the move was applauded by many football pundits and fans, the trade ultimately didn’t work out.

Trent Richardson ended up averaging only 3.1 yards per carrying and scoring only 6 touchdowns in 2 seasons with the team and was a healthy scratch during the AFC Championship game in 2015.

Another questionable move that confused many was the drafting of Phillip Dorsett in the 1st round of the 2015 NFL draft, while the Colts offensive line was struggling to protect their franchise quarterback, and their defense coming off a less than mediocre season.

However, a trade that worked out exceptionally well for Grigson and the Colts was the acquisition of former first-round draft pick Vontae Davis in 2012 who was a big part of the 2012 turnaround and was later named to the Pro Bowl in both 2014 and 2015.

Another shrewd move by Grigson was the trade and subsequent selection of T.Y. Hilton in the 2013 NFL’s draft.

Grigson essentially gave up the fifth pick for the right to move up from the early fourth to the late third round and select a three-time Pro Bowl Selection and the NFL’s leading receiver in 2016.

Overall, the Colts had an impressive regular season record of 49-31 (.613 winning percentage) while Grigson was general manager.

There are no any pieces of information of his salary and Net Worth. They are under review.

He has a height of 6 feet 6 inches with a bodyweight of 132 kg. He has black hair color and his eye color is dark brown.