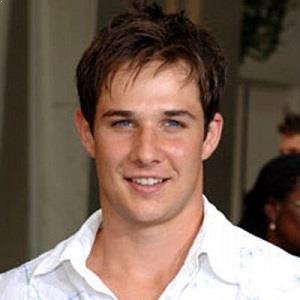 I graduated from public high school. I went to the prom. I did it all. But I also worked on 30-million dollar movies with roller coasters and Michelle Pfeiffer. It's been a very interesting and blessed life for sure.

It's nice to have a little bit of action in your world. Sometimes us actors go a couple months without working, it gets a little crazy. It's good to be busy.

What is the relationship of Ryan Merriman?

Ryan Merriman was previously married to Micol Merriman. The pair were married for about 7 years from 25 June 2004 to August 2011. Then, during 2006 he had a brief relationship of 3 months with American Actress Mary Elizabeth Winstead.

Ryan is currently married to girlfriend Kristen McMullen. The pair dated for a year after getting together in August 2011. After getting engaged for a year, the couple finally decided to tie the knot.

The wedding ceremony took place on 5th September 2014. Currently, the marriage seems to be going strong as no news regarding any extramarital affairs is known.

Who is Ryan Merriman?

Ryan Merriman is an American actor. People mostly know him for his appearances in various Disney Channel original movies and other several movies and television series including ‘The Ring Two’, ‘Final Destination 3’, and ‘Pretty Little Liars’.

Ryan was born in Choctaw, Oklahoma on April 10, 1983, to Earl and Nonalyn Merriman. Furthermore, he has a sister named Monica. He is of American nationality.

In addition, he belongs to a mixed ethnic background of German, English-Irish, English, and Scottish. His parent’s names are Nonalyn Merriman and Earl Merriman. He has a sister named Monica.

Talking about his education, there is not much information regarding the educational background of Ryan other than that he graduated from public high school and he played football in junior high and high school.

Initially, Ryan Merriman had a major role in the television series ‘The Mommies’. The series ran from 1993 to 1995. Next, he appeared in most episodes of The Pretender as a younger version of the title character during 1990.  Furthermore, he played the role of the lost son of Michelle Pfeiffer’s character in the 1999 feature film ‘The Deep End of the Ocean’.

Ryan has credits for appearing in more than 50 movies and television series as of now. Some of them are ‘Veritas: The Quest’, ‘Smallville’, ‘Home of the Giants’, ‘Backwoods’, ‘Comanche Moon’, ‘The 5th Quarter’. Additionally, his role as Ian Thomas on ABC Family’s ‘Pretty Little Liars’ is regarded as one of his most important roles on television.

Ryan won the Young Artist Award for ‘Taken’ in the category of Best Performance in a TV Movie, Mini-Series or Special in 2002. Furthermore, he also won the same award for his acting in ‘Dangerous Child’ in 2002. He also garnered the YoungStar Award nomination in 2000. All in all, he has 6 wins and 8 nominations to his name as an actor.

As a result of his successful career as a talented actor, he amassed a lot of fortune and fame. As of now, his net worth is estimated to be $2 Million as of 2022, but his salary is unknown.

One of the movies that he appeared in, ‘The Congressman’ attracted controversies towards it due to its political content. Currently, there are no rumors concerning Ryan Merriman.

Talking about his body measurement, Ryan Merriman has a height of 6 feet 1 inch (1.85 m). Additionally, he weighs 66kg. Furthermore, his hair color is dark brown and eye color is blue.

Ryan is fairly active over social media. He has more than 63.4k followers on Twitter.