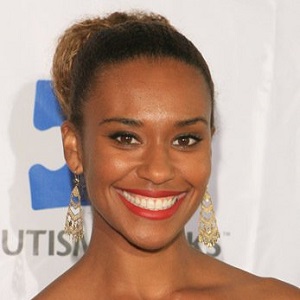 Reflecting on a personal life of Ryan Michelle Bathe, she is a married woman. She is married to her longtime boyfriend Sterling K. Brown. The couple first met at their college and since then they were in a romantic relationship.

Who is Ryan Michelle Bathe?

Gorgeous and beautiful Ryan Michelle Bathe is an American actress. She is active in the entertainment field since 2001 and she is best known for her appearance in “One for the Money”, “This is Us”, “Retired at 35”, and “Boston Legal”.

American actress Ryan Michelle Bathe seems to be a pretty private person who hasn’t much revealed regarding her personal life. All we knew of hers that she was born on 27 July 1976 in St. Louis, Missouri.

She is of African American ethnicity and has an American nationality. Bathe studied at Westhill High School and graduated from Stanford University. She received a Master of Fine Arts from New York University.

Talking about career journey of Ryan Michelle Bathe, she is active in the entertainment field since 2001 and she is still active in it. In 2003, she appeared in a television film “Good Fences”. In acting field, her career took on a successful path when she appeared as a regular cast member second season of the ABC legal drama series “Boston Legal” in which she portrayed the character of attorney Sara Holt.

Bathe has also appeared in the independent films “All About Us” and “April Moon”. She has also appeared in the crime comedy film “One for the Money” as Jackie. She has spread her wings equally at ease with both forms of media. Her success in career path has paid her well financially. Her net worth varies depending on various sources so for now, we can say that her net worth has grown significantly.

She was criticized when her husband Sterling K Brown puckers up to her at the SAG Awards.