Ryan Miller is the First All-Star Team Award-winning ice hockey goaltender. Ryan Miller is married to Noureen DeWulf and is the father of one kid.

Ryan Miller is married to Noureen DeWulf. His wife, Noureen is an actress by profession.

The couple got married on the 3rd of September 2011. Later, on the 11th of Septemeber, the couple announced that they are excepting their first child.

Togther, the couple welcomed their son, Bodhi Ryan Miller in 2015. Recently, on the 3rd of September 2020, the couple completed their nine years of marriage. On the occasion, he wished his wife via Twitter. 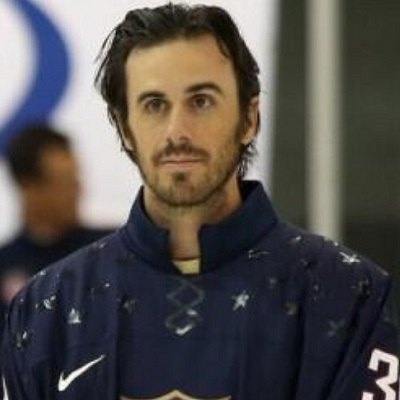 Who is Ryan Miller?

Ryan Miller is the First All-Star Team Award-winning ice hockey goaltender. He is renowned for his playing style as a goaltender.

Ryan Miller was born on the 17th of July 1980 in East Lansing, Michigan to Dean and Teresa Miller (mother). He is of British-Germanic-Scottish ethnicity.

His father is an ice hockey coach by profession. Also, he happens to be Ryan’s coach.

Along with his father Dean, he runs the Steadfast Foundation. The foundation works to support cancer patients and their families. Initially, he started the foundation when his cousin was diagnosed with blood cancer.

He has a younger brother, Drew Miller. Drew is also a professional ice hockey winger. Talking about academics, he happens to be a graduate of Michigan State University.

At the time, he also set the record a National Collegiate Athletic Association record with 26 shutouts. The year, he was awarded Hobey Baker Award.

Also, he earned CCHA’s Goaltender of the year for the three-season. Besides that, he was named as the Most played Player of two times too.

In 2002, Ryan Miller started his professional ice hockey career with the team, Buffalo Sabres. In the season 2002-2003, he played 15 games altogether for the team.

The following season, he won 41 games with the team and completed the season with a 2.45 GAA.

The next season, he established himself as the goalie of the team. In the season, he was ranked at the 11th position among NHL goalies with a 2.60 GAA.

On the 8th of September 2006, he signed a 3-year contract with the team. The season, he and his team won three games in a row. In 2008, he entered AMP Energy NHL Winter Classic for the first time. The completed the season with 2,64 GAA and .906 save percentage.

In February 2009, he suffered from a high-end ankle sprain during the game with the New York Rangers. Due to this reason, he didn’t play any match until March.

In 2010, he was selected as the starting goalie for the US team in the 2010 Winter Olympics. The year, the US won the silver medal. In the Olympics, he earned the best goaltender by the International Ice Hockey Federation.

In the late 2010-11 season, he suffered from the Upper-body injury. The following season, he didn’t perform well and completed the season with a 2.81 GAA and a .915 save percentage.

In 2014, the Sabres traded him along with the forward Steve Ott in exchange for Jaroslav Halák, Chris Stewart, William Carrier, and two future draft picks. On the 9th of May, he signed a 3-year contract. However, he left the team due to his lack of personal interest in the team.

After that, he signed with the Vancouver Canucks 3-year contract. On the 28th of October, he became the 30th 30th goaltender in the history of NHL to reach 300 career wins. On the 22nd of February, he got during the clash with Jannik Hansen.

In 2017, he signed two years contract with Anaheim Ducks. However, he started the season as a player in the injured-reserve list due to his wrist injury. Last, on the 20th of June 2019, he re-signed the team for one year.

As of 2022, he has an estimated net worth of $18 million. Also, his earnings as a goaltender of Anaheim Ducks are in the range of $2.2 million.

– July 1, 2017- Signed 2-year contact with Anaheim Ducks worth four million that was eventually extended for 1 year for $2.235 million.

Ryan Miller has black eyes with brunette hair. He stands at a height of 6 feet 2 inches and weighs around 62 kg.

Talking about his appearance, he has a sharp look with a long-shaped facial structure. Also, he prefers to have grown facial hair.

Till the date, he has not been a part of any sort of controversy and scandals that created a buzz in the media.

Besides that, he has managed to maintain a distance from any type of rumor too.

You may also read the bio of Nazem Kadri, Jacob Markstrom, and Rastislav Staňa.

Ryan Sheckler Wedding! Who Is His Wife Abigail Baloun?