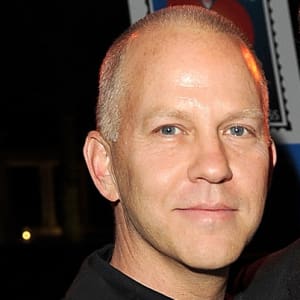 Ah, my famous cologne. It's because when I was growing up, I could only afford that cheap Halston stuff

I just loved it. I remember seeing it as a kid and being absolutely fascinated because it's people doing terrible things and yet you understand why they're doing them. I was very inspired by that when I made Running with Scissors (2006)". It was the same idea

I think it's only natural to be influenced by the filmmakers and things that you gravitate to when you were younger. I think my first seminal television moment was my grandmother forcing me, sobbing and screaming, to watch 'Dark Shadows'

What is the relationship of Ryan Murphy?

Ryan Murphy is a married man. He is openly gay. He got married to David Miller in 2012. The couple has two children namely, Logan Phineas Miller, and  Ford Miller.

They are living a happy life together with no sign of any other marital affairs.

Who is Ryan Murphy?

Ryan Murphy is an American screenwriter, director, and producer. Likewise, he is well t known for creating/co-creating/producing a number of successful television series, including the FX medical drama Nip/Tuck (2003–10), the Fox musical comedy-drama Glee (2009–15).

Ryan was born in Indianapolis, Indiana, the United States on November 30, 1965. There is no information regarding his father and mother. He was raised in an Irish Catholic family.

He has a sibling namely, Darren Murphy. He belongs to American nationality and English ethnicity. His birth sign is Sagittarius. Talking about his education, firstly, he attended Warren Central High School.

Then, he graduated from Indiana University.

Talking about his profession, Ryan Murphy started as a journalist working for The Miami Herald, Los Angeles Times, New York Daily News, Knoxville News Sentinel, and Entertainment Weekly. Likewise, be began scriptwriting in the late 1990s, when Steven Spielberg purchased his script Why Can’t I Be Audrey Hepburn.

Moreover, he started his career in television with the teen comedy series Popular, which he co-created with Gina Matthews. Then, he created the FX drama series Nip/Tuck, which premiered on July 18, 2003.

In 2009, his musical comedy-drama series, Glee, premiered on Fox. Whereas, he co-created the series with Brad Falchuk and Ian Brennan. Besides that, he also wrote the screenplay for and directed the feature film Running with Scissors.

Whereas, the memoir by Augusten Burroughs, the movie version starred Annette Bening, Alec Baldwin, and Brian Cox and, as the young Burroughs, Joseph Cross. During 2010, he also directed Julia Roberts in an adaptation of Elizabeth Gilbert’s memoir Eat, Pray, Love.

Then, he collaborated with The Normal Heart executive producer Jason Blum to produce the remake of the cult-classic horror film The Town That Dreaded Sundown.

Talking about his lifetime achievements and awards, he won Primetime Emmy Award for Outstanding Directing for a Limited Series, Movie, or a Dramatic Special for American Crime Story (2016).

There is no information regarding his salary. His net worth is around $150 million as of 2022.

On talking about his body measurements, Ryan Murphy has a height of 6 feet. Additionally, he weighs is 82Kg. His hair color is bald and his eye color is grey.