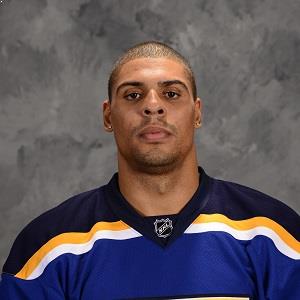 Ryan Reaves is a married man. His wife’s name is Alanna Forsyth. They got married in the year 2014. They had a daughter named Kamilla.

Being a private person there is no other information on his relationship details. Also, he has not revealed anything about his past affair.

Who is Ryan Reaves?

Ryan was born on January 20, 1987, in Winnipeg, Manitoba, Canada. His nationality is Canadian and he is of Afro-Canadian ethnicity.

He is the son of Afro-Canadian parents Willard Reaves and Brenda Reaves. His father is a former professional football player of the CFL and NFL. His younger brother, Jordan Reaves plays for the Saskatchewan Roughriders.

He was educated at the St. John’s-Ravenscourt School, where he played ice hockey for the schools’ team. He was passionate about ice hockey since his early age and he wanted to become a professional hockey player when he was in school.

Reaves was drafted by the St. Louis Blues of the National Hockey League (NHL) in round 5, #156 overall of the 2005 NHL Entry Draft. After that, he was traded to the Peoria Rivermen of AHL. He was recalled from Peoria by the Blues on October 10, 2010. He made his NHL debut with St. Louis Blues on October 11, 2010. Ryan returned to Peoria after two games with the Blues. He later scored his first NHL goal on January 12, 2011, against Jonas Hiller of the Anaheim Ducks.

Ryan Reaves: Salary and Net Worth

With the Blues, he has an annual salary of 1.125 million dollars. His net worth is unknown to the media.

Ryan has a height of 6 feet 2 inches and weighs 102 kg. His hair color is black and his eye color is also black. His shoe size is unknown.