Talking about her relationship details, Ryann Redmond is possibly single and she might not be dating anyone at the moment. She seems to be focused on her career and

It seems the star does not prefer sharing her relationship details and private life on media. She has kept her personal details low-key. 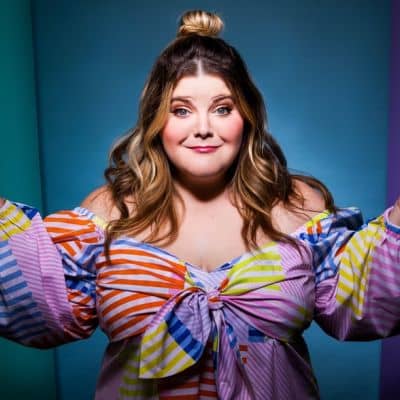 Who is Ryann Redmond?

Ryann Redmond is a well-recognized American actress and singer. Redmond is widely famed for her role as Bridget in Bring It On the Musical.

Moreover, she became the first female actor to portray Olaf in Frozen on Broadway in 2019.

Ryann Redmond was born on 8 August 1989. At present, she is 32 years young star. Likewise, her birthplace is Atlanta, Georgia, the USA.

Ryann is the daughter of her father, Webb Redmond whereas her mother is Andrea Elvey. Moreover, she has six siblings and step-siblings.

Talking about her nationality, Redmond holds an American identity whereas her ethnicity is Caucasian.

Regarding education, the star studied at South Forsyth High School. Upon her graduation, she studied musical theatre in the CAP21 program at Tisch School of the Arts NYU on a full scholarship.

Ryann started her career in the year 2009 and later in the year 2010, she featured in the role of Alice in the Elizabeth Swados musical Alice at the Palace. She also appeared in Swados’ musical Books, Cook!, and earned standout reviews.

Moreover, Redmond also continued to participate in Broadway Dreams Foundation workshops, and in 2011 while she was performing at a NY Benefit, she got the opportunity to read for Bridget in Bring It On the Musical. The star performed the role in the initial reading, NY Workshop, World Premiere in Atlanta, and the National Tour across the US and Canada.

The star also debuted on Broadway in Bring It On the Musical in 2012. The musical was also nominated for the Tony Award for Best Musical. In 2014, the star performed the role of Paulette in the musical If/Then which opened on 20 March 2014.

Freshly, it was mentioned that Ryann would take over the role of Olaf in the Broadway production of Frozen on 15 January 2019. With that, she became the first woman to perform the role. But sadly, due to 2019-20 corona, all Broadway theatres were closed on 12 March 2020.

A famed personality, Redmond has earned a handsome amount of money from her profession. She has been active in her profession from the year 2009 till the present.

It is reported that Ryann Redmond has an estimated net worth of $1 million.

Ryann has never been part of any controversial matter or rumors till now. The actress has been preoccupied with her professional and private life.

It seems that Redmond prefers enjoying her personal life and does not want to merge it with her professional life.

32 years young actress, Ryann has beautiful looks and an admirable personality. She has not stated her exact height but seems to be more than 5 feet tall.

Furthermore, Redmond has blue eyes whereas her hair is blonde.

Regarding her social media presence, Ryann Redmond is an active personality on social media. Ryann has more than 14.4k followers on her official Instagram account @ryannreds.