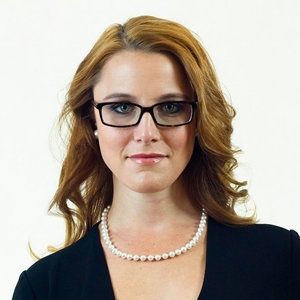 When women turn on women, and take cheap shots at their decisions purely to score political points it serves as proof that feminism, as a movement, is dead and no longer relevant or credible.

S. E. Cupp is a married woman. She is married to her longtime boyfriend, John Goodwin. Her husband is chief of staff to Representative Raúl Labrador. The couple started dating in the year 2011.

In September 2011, the couple engaged and they got married on 1st November 2013. Their marriage was a private affair where only their close friends and family were invited.

After a year of their wedding, Cupp revealed that she was pregnant. They have a child, John Davies Goodwin III (son), born in December 2014.

S. E. Cupp is an American television host, conservative political commentator, and writer. S. E. Cupp has been one of CNN’s political debate shows, Crossfire and Real News From The Blaze.

She has co-hosted S.E. Cupp: Unfiltered along with Andrew Levy.

Cupp was born on 23rd February 1979, in Carlsbad, California, United States. When she was a teenager, her family shifted to Andover, Massachusetts.

Her birth name is Sarah Elizabeth Cupp. Talking about her ethnicity, it is mixed (Italian and German) and her nationality is American.

Her mother’s name is Patricia Cupp and her father’s name is not known. There is no information about her siblings. She is a trained ballet dancer, she learned ballet from age 6. When she was in her school she had eating disorders, suffering a relapse.

For the school level, Sarah went to the Academy of Notre Dame. She later studied at Cornell University. Later she joined New York University and graduated with a Master of Arts & concentration in Religious Studies.

S. E. started her career soon after her graduation in an online magazine and a public relations company. She joined The New York Times in the year 2002 as a writer and editor. She has made her appearance and shared her views on the channels like CNN, Fox News, and MSNBC.

In the year 2009, she switched at Daily News as a columnist, in 2011, as a writer and commentator in Mercury Radio Arts. In 2012, she co-hosted The Cycle on MSNBC along with Krystal Ball.

She left CNBC in 2017 and joined HLN as a host, her sister’s network. Currently, she is working at CNN since August 2018.

S.E.’s salary is around $500,000 per annum and her estimated net worth is $6 million according to the sources.

Shirley Ballas reveals her ‘painful’ beauty treatments as she readies for the filming for the next season of the show Strictly Come Dancing!