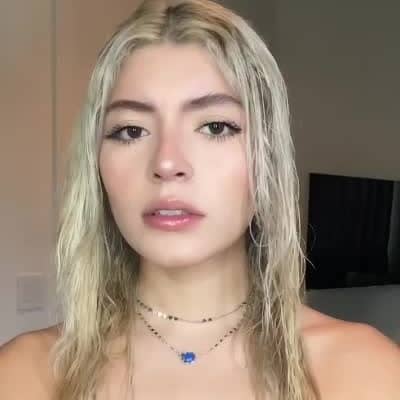 Sabrina is single at the moment. The star is now more focused on building his career and isn’t interested in any affairs right now.

She was engaged in a relationship in the past. She said that she had her first relationship at 14. They dated for around 3 years but has various us and downs in the relations. And it had a bitter end from which she believed that she has gained trust issues because of that failed relationship.

Who is Sabrina Quesada?

Sabrina Quesada is an American fitness guru, Tiktok Star, and social media personality. She is well-known for her internet name, Sab.

The star rose to fame for her dance, POV, lip-sync, and trend videos which she posts on her Tik Tok account.

Sabrina was born on March 1, 2002, in Mexico City, Mexico. Quesada resides in Pembroke Pines, Florida, the USA with her family.

She hasn’t disclosed her parent’s name yet is very close to her family members. She has a sister named Nicolle and also two brothers named Samuel and Diego.

The star holds Mexican nationality and her ancestry is of Spanish ethnic groups.

She attended the West Broward High School. After that, she studied at the University of Central Florida (UCF) in Orlando, Florida.

Sometimes she also performs the movies’ part adding her own kind of twists to her POVs. Talking about the movies from which she has made POVs are The Age of Adaline, The Giver, and The Darkest Minds.

She usually uses hashtags such as #threewords and #holidayhacks for her videos. It’s the reason that her performance is loved by people and gain stardom in a short span of time.

Sabrina launched her own self-titled YouTube channel on September 26, 2017. She often posted different entertaining videos. Her funny videos and Q&S have amassed more than a million views.

The star is now managed by Fullscreen. It is a social media content management and marketing agency. Sabrina also has endorsed and promoted different brands. She is also is quite fond of make-up and is also known for her makeup, style, and fashion.

Furthermore, the star also gets paid for partnerships and advertisements from her sponsors. She has her merchandise shop too which sells pullover hoodies with a signed note card costing around $55 per one.

The star has never been involved in any kind of rumors and controversies. She is focusing more on building her internet career right now.

She prefers to dye her hair to blonde and brown shades. Likely, she also uses various color contact lenses. Her body measurement is 33-26-35 inches.

She has around 2.5M followers and has over 140M likes on her TikTok account. Furthermore, she has her own YouTube channel with 90K subscribers.