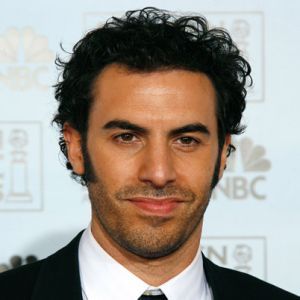 I think if you come from a history of persecution you have to develop a sense of humour.

Normally in dangerous situations I have a getaway car.

Dictators are ludicrous characters, and, you know, in my career and in my life, I've always enjoyed sort of inhabiting these ludicrous, larger-than-life characters that somehow exist in the real world.

What is the relationship of Sacha Baron Cohen?

Talking about his personal life, Sacha Baron Cohen is a married man. He is married to famous actress Isla Fisher. He first met Baron in 2002 at a party in Sydney, Australia. The couple became engaged in 2004. The couple got married on 15 March 2010.

They together have three children named Olive Baron Cohen, Elula Lottie Miriam Cohen, and Montgomery Moses Brian Baron Cohen. Sacha and Fisher have been married for seven years now and their relationship is going very well.

Who is Sacha Baron Cohen?

Sacha Baron Cohen is a British actor, comedian, screenwriter, and producer. He is most widely known for creating and portraying four fictional characters: Ali G, Borat Sagdiyev, Brüno Gehard. He also appeared in Talladega Night: The Ballad of Ricky Bobby. Baron also starred as Admiral General Haffaz Aladeen in The Dictator. His wife is a famous Australian actress Isla Fisher.

Sacha Baron was born on 13 October 1971, in Hammersmith, London, England, UK. His nationality is British and he is of Ashkenazi Jewish ethnicity.

His birth name is Sacha Noam, Baron Cohen. Baron’s mother Daniella Naomi worked as a movement instructor. His father, Gerald Baron Cohen was a clothing store owner. Sacha’s father died in 2016. He is fluent in both Hebrew and English. Cohen has two older brothers named Erran and Amnon.

He attended The Haberdashers’ Aske’s Boys’ School. After that, he enrolled at the University of Cambridge. He graduated in 1993 with upper second-class honors. Next, he attended the Cambridge University Amateur Dramatic Club. At the same time, he acted in several local plays. In addition, he performed in Habonim Dror Jewish theater performances.

After university graduation, Sacha Baron began his career as a fashion model. In the meantime, he appeared in many fashion magazines. By the early 1990s, he hosted a weekly program on Windsor cable television’s local broadcasts with Carol Kirkwood. In 1996, he began presenting the youth chat program F2F for Granada Talk TV. After that, he had a small role in an advert for McCain Microchips.

Baron-Cohen has been criticized for the racist comments he made for his fans and co-stars. The government of Kazakhstan threatened Baron Cohen with legal action following the 2005 MTV Europe Music Awards ceremony in Lisbon. Sacha has been in many other controversies in his life. However, his fans love him for his acting skills and charming looks.

He has a good height of 6 Feet and 3 Inches (1.91 m) with bodyweight 80 kg. He has black hair color and brown eye color. There is no information about his shoe size.