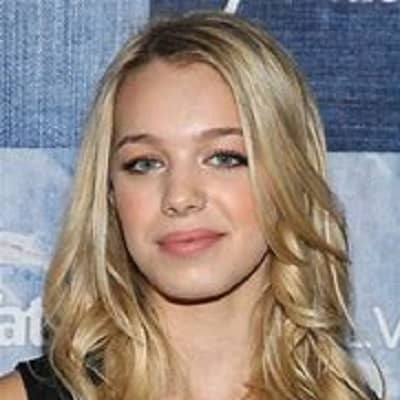 When something resonates with you, working for it seems more like play

At the end of the day, everyone wants to feel loved, appreciated and respected.

She is possibly single at present. If she is in a romantic relation also she hasn’t disclosed it on social media.

Previously, she was in a romantic relationship with Alex Brisker, who is a film director, producer, and photographer. She met in early 2016 while shooting for a TV series.

Who is Sadie Calvano?

Sadie Calvano is an American actress, who has accumulated fame for playing the role of Violet Plunkett in the CBS sitcom ‘Mom’.

Further, she was nominated for a young artist award for best performance in a TV Series and also nominated for a guest appearance in Disney XD’s comedy series ‘Kickin’ It.

Sadie was born on April 8, 1997, in Los Angeles, California. Further, she is of Caucasian ethnicity and holds American nationality. Her birth sign is Aries.

A Native American actress, Sadie’s father’s name is Steven Joseph Calvano and her mother’s name is Aimee B. Hagler. She completed her high school degree of Arts from LACHSA (Los Angeles County High School). Later, she joined Occidental College in Los Angeles to pursue a part-time degree in the last of 2015.

At an early age, she was a competitive gymnast and successfully won a gold medal at the 2010 California State Games in San Diego. But, she decided to pursue a career as an actress in her fourth grade.

Then, she began her journey by portraying the role of Alice in’ Alice In Wonderland (2008), Belle in ‘Beauty and The Beast’ (2008) at the Barnsdall Theatre, and Christina in ‘A Chicago Christma Carol’ (2010) at Crown City Theatre.

Besides that, she has performed various forms of dancing, including Jazz, ballet, and modern, and singing. She has been trained in horse riding also.

Heading towards the journey of her professional life, she made her screen debut in the season-eight episode, ‘Worst Nightmare’, of CBS’ action police procedural television series ‘NCIS’. Likewise, she has appeared on the season-one episode of Adult swim’s comedy series ‘Eagle heart’.

Moreover, she was also cast in the TV movie ‘Family Album’ that year. She has also starred in the telefilm which was directed by Shawn Levy and based on the screenplay by Je Port and Joe Wiseman. Likely, she made guest appearances as Lindsay in a second-season episode, of Disney XD’s comedy series ‘Kickin It.

Similarly, she has appearances on a pilot for the series that also starred Dusan Brown and Rachel Cannon. In the telefilm of 2016, ‘The Perfect daughter’ she worked with Brady Smith and Reiley McClendon. Then, she appeared in Jake Szymanski’s teen comedy ‘The Package’. She is set to appear in the film titled ‘Kingfish’ and TV series ‘Why Women Kill’.

This actress has plays Violet Plunkett, the daughter of Christy Jolene Plunkett (Faris) and granddaughter of Bonnie Plunkett (Janney).

She hasn’t uploaded any rumors and controversy. She has maintained her life so privately.

Sadie has an estimated net worth of $ 1 million. Her income source comes from her diverse range of roles and her projects. She is having a lavish lifestyle.

His height is 5 feet 2 inches and her body weight is around 54Kg.

She has fair skin with warm blonde hair color. Her eyes are grey in color.