Sadie Frost is a divorced woman. She had been married two times. Firstly, she tied a knot with Gary Kemp before her 23rd birthday on 7 May 1988.

The couple had been blessed with one child named Finlay(born in 1990). However, their marriage relationship lasts for just five years and then got separated, finally divorcing on 19 August 1995.

She then met Jude Law on the film Shopping during the work. The couple tied a knot on 2 September 1997 and had been blessed with three children: a daughter called Iris Law; a son born in 1996; and another son born in 2002. However, the couple got divorced on 29 October 2003.

Currently, she possibly might be living a single life focusing on her career. 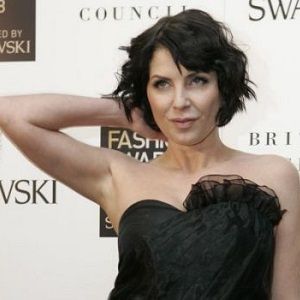 I don't like it when people don't act on their words.

I never thought I'd spend all my life with Gary. I suppose I was quite cynical about marriage. But with Jude, I knew right from the beginning: there was an electricity I'd never felt before. It was so easy, we talked for hours. It was a relief, really.

I always wear flat shoes, because I can't walk in anything else.

I'm a strong woman. It is so important that you don't stay with someone just for the children and for the wrong reasons.

By 17, I was modeling and had bought myself a flat. I've always tried to be self-sufficient.

At home it's all Batman and Star Wars and they do gang up on me. Sometimes I don't want to dress up as Darth Vader or play train sets, so I'll go out for a drink with the girls. I've never worn fur, either. I'm a naturally squeamish person, and fur smells like dead animal to me.

Who is Sadie Frost?

Sadie Frost is a popular English producer, actress, and fashion designer. She is recognized for her performances in Sky Captain and the World of Tomorrow (2004), Bram Stoker’s Dracula (1992), and Love, Honor, and Obey (2000).

Also, she is popular for running a film production company (Blonde to Black Pictures) and a fashion label called Frost French (until its closure in 2011).

A producer was born as Sadie Liza Vaughan to her parents David Vaughan and Mary Davidson on 19th June 1965 in Islington, London, England. Her ethnicity is English.

Her father is a psychedelic artist while her mother a muse actress. She has five brothers and four sisters as Holly Davidson, fellow actresses, Jade Davidson, Jessi Frost, a primary school teacher, and Sunshine Purple Tara Velvet while brothers called Tobias Vaughan and Gabriel Jupiter.

In discussing her childhood, she had a chaotic but positive experience during her childhood. She had spent most of her youth under-Lyne, Lancashire in Ashton after her parents got separated.

In discussing her educational background, she joined Hampstead School and got graduated.

On talking about her career, firstly, Sadie Frost performed at the age of three in 1968 in a Jelly Tots advertisement. She then played in 1970 along with Wise and Morecambe at the age of five.  Moreover, she left her parents and appeared in the play entitled Mumbo Jumbo at the age of 19 in 1984 at the Royal Exchange Theatre, Manchester.

Another, she performed in Casualty and Press Gang. Other, she appeared in Francis Ford Coppola’s Bram Stoker’s Dracula (1992) as vampire Lucy Westenra. Further, she performed in music videos, including for several productions for Spandau Ballet and Pulp’s song entitled “Common People”, Planet Perfecto featuring Grace’s  “Not Over Yet ’99”.

Furthermore, she then appeared along with Kemp in the film entitled The Krays (1990) and two other more films together. In addition, she appeared in Paul W. S. Anderson’s directorial debut Shopping with a role opposite Jude Law. However, she headed into the producing sector co-establishing the production company named Natural Nylon after cutting down her acting career in the late 1990s.

Additionally, Frost co-founded the fashion label named Frost French in 1999 along with her friend Jemima French. Besides, she appeared in a new one-woman show named Touched … For the Very First Time with her West End debut.

Later, she performed for Love alongside Carl Barat, formerly of The Libertines in January 2010 in the play entitled Fool.

In discussing her awards, she had received Elle‘s Designers of the Year Award 2004.

Sadie Frost: Salary and the Net worth

She earns a high amount of salary from her successful career but has not revealed it to the media. However, she has an estimated net worth of $4 Million.

Thus, there are no such records related to her controversies and rumors.

In discussing her body measurement, Sadie Frost has an attractive body with the body statistics of 36-28-34 inches.

She has a height of 5 feet 4 inches and a weight of 56Kg. She possesses dark brown hair color and green eyes.

Also, read the affair, salary, the net worth, controversy, and the bio of Wes Brown, Chris Santos, and Kay Panabaker.