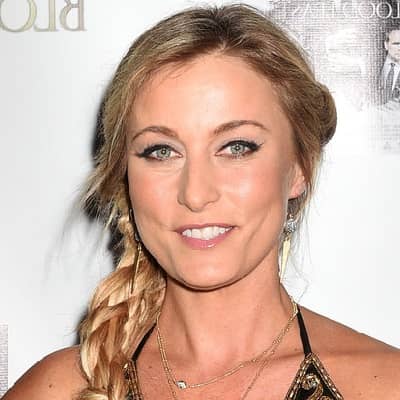 The couple also appears in different events together and are seen spending time together in public.

She also has a son named Griffin Stone Katz. Further Oct 22, 2017, she also posts on Twitter saying that she was proud of her son singing the chorus.

Her husband’s name is Jeremy P. Katz. However the wedding and divorced details are not disclosed.

Who is Sadie Katz?

She is most popular for starring as the twisted, sexy Sally Hillicker in 20th Century Fox’s successful horror franchise Wrong Turn 6. The actress is also popular for appearing in The Bill Murray Experience, and House of Bad.

Further, the writer wrote the script for Scorned, which was loosely inspired by a breakup in her own life.

She was born on October 13, 1982, in Los Angeles, California, USA. Her birth name is Sadie Lorraine Jones.

Her parent’s name is unknown. Likely, she hasn’t revealed any information regarding her childhood and siblings too.

Talking about her nationality, it’s American and belongs to Mixed (German and Ashkenazi) ethnicity.

There are no details regarding her academics.

Sadie Katz started her career in the film industry in the year 2005. Katz got her start in horror with the award-winning House of Bad receiving rave reviews from Fangoria, Dread Central, and Shock till you Drop. She has starred as Sally Hilliker in the movie, Wrong Turn 6:Last Resort and was loved by the audience.

Katz is also known for her roles in, Chavez: Cage of Glory, House of Bad, Party Bus to Hell, Blood Feast, Dread Central, and Shock Till You Drop, and many more. She further appeared in the Lifetime original movie The Haunting of Deanna Simpson. Her performance as Sadie was one of the iconic characters in classic Blood Feast.

Talking about her other thrillers included the State of Desolation and Slashers Hanukkah and The Amityville Harvest. Due to her acting credits in different thrillers, she is also considered to be a scream queen.

Her enthusiasm also earned her an award named in her honor “Sadie Katz Hustle Award.” The actress also received Hollywood Horrorfest’s Best Supporting Actress Award for the Festival’s Best Horror Film winner “Automation.” In the year 2013, she has played the role of Gina in the TV series, 7 Lives Xposed.

She was a writer, producer, and director of a 2017 documentary called The Bill Murray Experience. It was able to win several awards in festivals and receiving worldwide distribution with Gravitas Ventures.

Furthermore, she has also written the script for Scorned, which was released on December 19, 2017. She wrote that getting inspired by her own breakup.

Her income source is from her acting and producing career.

The actress has kept herself out of any rumors until now. Meanwhile, she is also far from bringing in any controversies in the media.

The actress has brown colored hair but prefers to dyed in different shades of blonde and others. Likely, she has beautiful blue eyes.

Also, get to know about other famous actresses like Alice Evans, Emma Davies, Drena De Niro, and Kate Phillips.