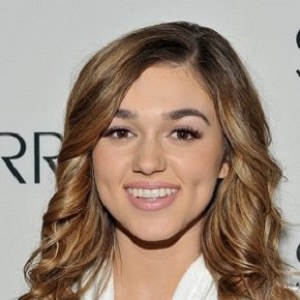 We saw a million little miracles yesterday - the best one being this girl right here. Story to come, but I’m way too occupied right now by cuteness.

Baby, you are already loved and already believed in. Can’t wait to welcome you into the world with all the joy, hope, and excitement you will bring into the life of so many by your miraculous incredible life.

What is the relationship of Sadie Robertson?

Sadie Robertson is now married. She exchanged vows with Christian Huff on 25 Nov 2019.

They started to see each other in late 2018 and their rings were exchanged in June 2019. The couple has a daughter Honey born on 11th May 2021. Sadie revealed her pregnancy in October 2020.

Sadie Robertson is Expecting her Second Baby with her Husband Christian Huff revealed in November 2022.

Previously, Sadie dated Blake Coward in 2014. After two years of their affair, the couple ended their relationship in 2016.

After that, she began dating famous American football player Trevor Knight in July 2016. The couple has been together for a year now and their relationship is going very well.

Who is Sadie Robertson?

Sadie Robertson is an American actress and reality television star. In addition, she is an author. She is best known for appearing on the Arts & Entertainment Network show, Duck Dynasty.

She is also famous as the runner-up of the 19th season of Dancing with the Stars. As an actress, she is famous for her role as Marlene in the 2016 American Christian drama film God’s Not Dead 2.

Sadie was born on June 11, 1997, in West Monroe, Louisiana, United States. Her nationality is American but her ethnicity is Caucasian.

Her birth name is Sadie Carroway Robertson. She is the daughter of Willie Robertson and Korie Robertson (mother). Her father is the current CEO of Duck Commander.

She completed her school education at Ouachita Christian School. In the 2013 javelin throwing competition, she finished sixth place in the state of Louisiana.

Sadie Robertson began her career as a reality TV star in 2012. She made her TV debut in 2012, on the Arts & Entertainment Network show, Duck Dynasty.

Since then, she has regularly appeared in Duck Dynasty. In 2014, she competed on Dancing with the Stars: Season 19.

After that, she appeared as Marlene in the 2016 film God’s Not Dead 2. She then played the character Charity in I’m Not Ashamed (2016).

As of 2022, she has a net worth of $1 Million according to the sources. However, her salary is not revealed yet.

Rumors are that Sadie and her boyfriend Trevor are getting engaged soon. She has not confirmed the rumor yet.  It is rumored that she is set to play a lead role in a new Hallmark movie.

If the rumor is true, she will be appearing on a movie screen for the third time.

Her bra size is 32A. Furthermore, she has dark brown hair and dark brown eyes. Her shoe size is 8.5 (US).