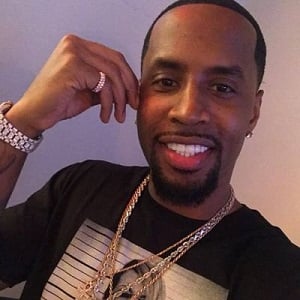 What is the relationship of Safaree Samuels?

Safaree was married to Erica Mena on 7th October 2019. They have a daughter Safire Majesty Samuels born on 2nd February 2020. And she is pregnant with her ex-husband Safaree’s second child.

Sadly, Erica filed for divorce from her husband in Fayette County Superior Court, Georgia. Amid divorce, she wants her daughter’s joint legal custody and child support. However, the couple has not revealed the reason for their split.

Previously, Safaree Samuels dated famous rapper, Nicki Minaj, from 2000 to 2014. In 2011, he was in a relationship with socialite and actress, Amber Rose.

In 2017, Samuels also had a brief relationship with model Star Divine 2017. At present, he is a married man.

Who is Safaree Samuels?

Safaree Samuels is an American rapper, television personality, and songwriter. People mostly recognize him as the cast of the VH1 reality show, ‘Love & Hip Hop: Hollywood’.

Additionally, was also the hype man for rapper Nicki Minaj.

Samuels was born as Safaree Lloyd Samuels in Marine Park, Brooklyn on July 4, 1981. Details about his father and mother are not disclosed.

Additionally, he has two sisters, Shamika and Samantha Samuels.

Samuels became interested in the world of rap from an early age. He is of American nationality. Furthermore, he belongs to the Jamaican ethnic background.

Safaree Samuels initially began his musical career in the group the Hood stars. The group was formed in the early 2000s and included rappers including Nicki Minaj, Lou$tar, and Seven Up.

Their song titled ‘Don’t Mess with’ was the entrance song for WWE Diva Victoria and was featured on the compilation album ‘ThemeAddict: WWE The Music, Vol.6’. In addition, Samuels co-wrote the single ‘Did It On’em’ for ‘Pink Friday’, Nicki Minaj’s debut studio album.

Coming to his solo career, Samuels released the mixtapes, ‘It Is What It Is and It Is What It Is, Vol. 2.’ In 2015. Additionally, he appeared in the second season of ‘K. Michelle: My Life’ in 2016. He released his new mixtape titled ‘Real Yard Vibes’ in July 2016.

Furthermore, it was announced in May 2016 that he will join the cast of the VH1 reality show, ‘Love & Hip Hop: Hollywood for the show’s third season. Additionally, he also competed in the first season of VH1’s ‘Scared Famous’.

He has not revealed his current salary. However, he has an estimated net worth of around $3 million as of 2022.

Samuels became part of a controversy after his nude picture and video were leaked online in February 2018. Additionally, his relationship with model Star Divine also stirred controversies.

Divine was held responsible for assaulting Samuels which resulted in him being hospitalized. At present, there are no rumors concerning his life and career.

Talking about his body measurement, Safaree Samuels has a height of 6 feet 1 inch (1.85 m). Additionally, he weighs around 81 kg.