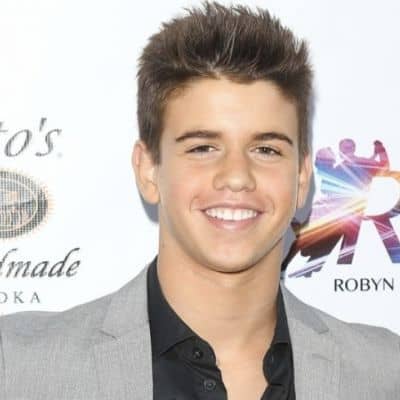 Who is Sage Rosen Dating?

As of September 2022, Sage Rosen is possibly single as he has not made any social media posts regarding his relationship and girlfriend.

Nonetheless Previously, he was rumored to be dating Mackenzie Ziegler, dancer, and actress. The rumors broke out after they were spotted sharing a hug on the set of Dancing with the Stars, in October 2019.

Who is Sage Rosen?

Sage Rosen is an American pro dancer and social media star. He rose to prominence after appearing on the Dancing show, Dancing with the Stars: Juniors, and has performed with famous stars like Chris Brown, Sia,

Justin Bieber, and others.

Who are the parents of Sage Rosen?

The three-time National Dance Champion, Sage was born on October 1, 2002, in San Diego, California, the United States. As of 2022, he is 20 years old holding an American nationality while his birth sign is Libra. Similarly, he belongs to the Caucasian ethnicity.

Talking about his parents, he was born to his father, Jimmy Rosen, and his mother, Tiffany Rosen. Likewise, he is the youngest child of his parents having five older siblings. They are his brother named, Shair and four sisters named, Shoshana, Sasha, Shaya, and Shaynee. He also has a good relationship with his grandparents, David & Judy Zwick.

As per his academics, he is homeschooled.

Briefing about his professional career, at the age of 9, he began dancing and was linked with talent management company Bloc LA. Then, he took lessons along with the professional choreographers in the nation.

In 2015, he was featured on Nickelodeon in a ‘Nicky, Ricky, Dicky & Dawn’  episode. In the following year, he was a competitor in the ‘Lip-Sync Shorties Battle.’

Following that, he competed in ‘Dancing with the stars: Junior’, in 2018 along with his dance partner, Mackenzie Ziegler, under the instruction of Gleb Savchenko, a Russian choreographer. They ended the competition by standing as a second-runner-up.

Therefore, being the three-time winner of the National Dance Champion, he launched a YouTube channel titled, Sage, on June 15, 2019. On his YouTube channel, he shares dance tutorials and vlogs.

As a dancer, Sage Rosen has an estimated net worth of around $1 million as of 2023. Through his dancing career, he is making decent money.

He was paid about $1,500 per episode, for his appearance at Dancing With The Stars: Juniors. Moreover, the actor also has endorsement deals with known brands.

Rosen also makes some money through his YouTube channel.

An American pro dancer, Sage has not been part of any serious rumors and controversies as he is able to maintain a clean profile till now.

What are the body features of Sage Rosen?

The young and emerging dance star stands at the height of 5 feet 5 inches weighing around 60 Kg. His waist size is 29 inches while his bust and hips size is not available at present.

In addition, Sage Rosen has a pair of hazel eyes and dark brown hair along with a fair complexion.

Being a social media sensation, Sage Rosen is popular on social media platforms as well. He has an Instagram under the username, @sageasher which has garnered around 522K followers.

Other than this, his Twitter account is enriched with over, 1.7K followers. There is also an official Facebook page under his name, that has about 1.1K followers.

On top of that, he has a self-titled Youtube channel, which has nearly 55.9K subscribers.

In addition, Sage also owns a TikTok account which is followed by 3.6 million people.

Britney Spears Pays a Tribute to her Estranged Sister Jamie Lynn Spears on Her Own Birthday!