Sage Steele is a journalist and a TV host who works for ESPN. She is possibly single. 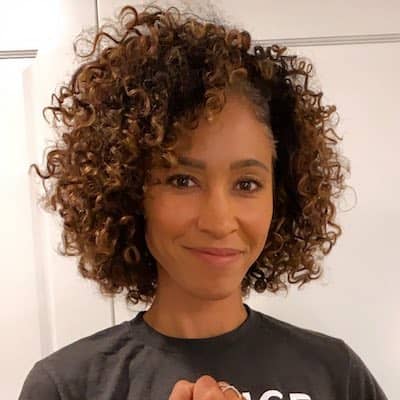 If they make you choose a race, she's like ‘What are you going to put?’ And I go, ‘Both.’ And she's like, 'Well, you can’t,' she goes, 'Barack Obama chose Black and he's biracial.' And I'm like, ‘Congratulations to the president.' That’s his thing. I think that's fascinating considering his Black dad was nowhere to be found and his White mom and grandma raised him, but hey, you do you. I'm gonna do me.

What is the relationship of Sage Steele?

But she was previously married to a former personal trainer. Her ex-husband’s name is Jonathan Bailey and their wedding was on 30 October 1999.

They met each other in their college days and together had three children. Their daughters are Quinn, and Evan and their son’s name is Nicholas.

But after two decades, Sage and Jonathan decided to go apart and they divorced in 2019. On 15 Feb 2021, she posted a picture with her kids and dog on social media.

Who is Sage Steele?

Sage Steele is an American journalist and a TV host. She at present works for ESPN on their SportsCenter show as one of the hosts.

She mainly hosts events like the Super Bowl and The Masters. She has covered the matches of the Indianapolis Colts, Indiana Pacers, Indianapolis 500, and Brickyard 400 auto races.

She was born as Sage Marie Steele on 28 Nov 1972 in Panama Canal Zone, USA. She is 49 years old. The name of her father and her mother name is Gary Steele and Mona Steele respectively.

She grew up with two brothers, Courtney Steele and Chad Steele, in addition to her parents.

Similarly, Chad is currently the Vice President of Public Relations for the Baltimore Ravens of the National Football League.

Sage’s father was also the first African-American to play varsity football at West Point and later served in the US military as an army.

Spake and her family moved to different states and countries as a result of her father’s job, including Greece and Belgium.

Steele then relocated to Carmel, Indiana, where she completed her high school education at Carmel High School and graduated in 1990. In terms of furthering her education, she enrolled at Indiana University Bloomington.

Sage went on to work for CBS affiliate WSBT-TV in South Bend, Indiana, after graduating. She worked as a sports reporter and news producer there until 1997.

From 1997 to 1998, Steele worked as a weekend morning sports anchor and weekday reporter for CBS, another affiliate channel WISH-TV in Indianapolis, Indiana.

She moved to Tampa in August 1998 to work as a reporter, anchor, and host for WFTS-TV. She also had the opportunity to work with Jay Crawford, a former WFTS sports director and SportsCentre host.

She also worked as a beat reporter for the Tampa Bay Buccaneers and covered the 1999 NCAA Men’s Final Four. She joined Fox SportsNet as a reporter a year later and covered Super Bowl XXXV for the 2000-01 NFL season.

Steele hosted the Comcast SportsNet debut in the Washington DC/Baltimore area in April 2001.

She also hosted SportsNite for six years and worked as a beat reporter for the Baltimore Ravens, hosting a magazine show for all five seasons until 2007.

She has also worked at First Take and Mike & Mike, as well as being a guest co-host on ESPN2’s SportsNation.

Steele began hosting NBA Countdown at the start of the 2013 NBA season, and he continued to do so for ESPN and ABC throughout 2017. Similarly, she co-hosted the Miss America beauty pageant on ABC in 2017 and 2018 with Chris Harrison.

She earns $400k per year from reporting and hosting, according to sources. Sage’s exact salary has not yet been disclosed to the media, but her net worth is estimated to be between $1.5 million as of 2022.

What is Sage Steele doing now?

Where was Sage Steele born?

Who is Sage Steele father?