Sally Bundock is a journalist, news anchor. She is a correspondant of in BBC's World Business Report. Sally is married to her longtime boyfriend since 1999 and has three children. 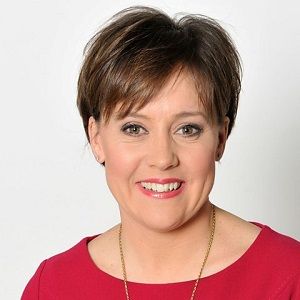 Sally Bundock is married to Paul Bundock in October 1999. Paul is a Managing Director at Digicut TV Productions. He is also a freelance editor. Sally and Paul dated for a while before getting married.

They wed in Market Harborough in the United Kingdom. They have three children together. All of them are boys.

Who is Sally Bundock?

England-born Sally Bundock is a British business news presenter. She is in the field of journalism and news broadcasting.

Previously, she used to work for the Bloomberg news network.

She reported on the business-related news during her time there like “G7 conferences,” and “EU Summits.”

Presently, she is an employee of BBC News working on “World Business Report.”

Sally Bundock was born in North East Lincolnshire in England as Sally Jackson in 1972. She is of English ancestory.

She attended City University in London. Later, in 1996, she graduated with a degree in ‘Broadcast Journalism.’

Sally Bundock is a professional news presenter. She started working in the journalism field after college.

Initially, she joined Bloomberg Network. Bloomberg is famously known for reporting the business news. She used to work for them presenting business news. Additionally, she also presented economic and financial news. During her time at Bloomberg, she presented news on “G7 conferences,” and “EU Summits.”

After some time, she left Bloomberg.

Then she joined BBC News as a business news anchor. At first, she presented in the Breakfast News.

In September 2001, she began a new show, “World Business Report.” A year later in 2002, she started presenting the show.

The show focuses on several fields like sports, politics, and others. Currently, she is the presenter in “BBCBizLive,” and “World Business Report.”

Sally Bundock has an average height of 5 feet. She is a brunette with light eyes.