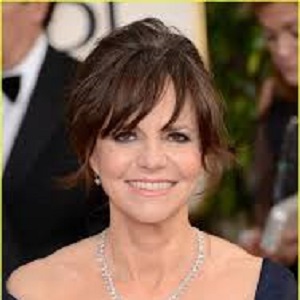 When I was born, the doctor looked at my mother and said, 'Congratulations, you have an actor

But I was losing so much bone density that I would have been in grave danger. And I mean grave danger. If I had let it go just a few more years I could have broken my hip or spine just picking up my granddaughter

I think that's very sad, that I haven't allowed my heart to be broken. I have broken a few.

Talking about her personal life, Sally Field is a married woman. She was married twice but both her married life didn’t last long. First, she was married to Steven Craig on 16th September 1968. They remained together for a shy of a decade and during this time interval, they also had two children.

However, something went wrong and they divorced on 1st August 1975. Then she stayed single for about a decade and she finally got married for the second time in 1985. She was married to Alan Greisman on 15th December 1984. Together they have one child. But this married life was also cursed by someone and they divorced on 20th December 1993. Sally had also dated Burt Reynolds for 5 years until they called it quits. Burt Reynolds had mentioned in his memoir that he still loves her and misses her. Sally Field is currently single.

Who is Sally Field?

Sally Field is an actress. She is also a director. She is popular in the world for portraying her role in the movies like Forrest Gump, Lincoln and so on.

Sally Field was born on November 6, 1946, in Pasadena, California, United States. She was born in a humble family to Richard Dryden Field as Sally Margaret Field. She was raised in Pasadena, California by her father and mother. However, her parents got some feud between them and they separated in 1950. After that, she was raised by her mother. She received her formal education from Portola Middle School and Birmingham High School.

Sally began her acting career in 1965. During that time, she appeared in some television shows. Her debut role was not that popular, she struggled so hard to find her role in the movies. Finally, in 1979, she got an offer to play in the movie Norma Rae.

2012 was also a year to remember for her. She was honored by various prestigious awards during this time. She was nominated in African-American Film Critics Association (AAFCA) for Best Supporting Actress; she won it the same time. On May 5, 2014, she got a star on the Hollywood Walk of Fame for her commitments to movies. Her star is situated before the Hollywood Wax Museum. In January 2015, it was declared that she would co-have TCM.

In 2017, Field repeated her part of Amanda Wingfield in The Glass Menagerie on Broadway at the Belasco Theater. Exhibitions started on February 7, 2017, in sneak peaks, and authoritatively opening on March 9. The generation will close on May 21, 2017.

She has a huge net worth of $55 million dollars due to endorsements of brands and revenues.

In 2007, Sally Field’s acceptance speech was highly criticized and considered as controversial. She stands up for people’s cause and does not like Donald Trump. She is not bothered when people say that they do not like celebrities talking politics.

Sally Field: her fight against osteoporosis, her well-defined shoulders and her take on celebrities and politics-Click to know more!