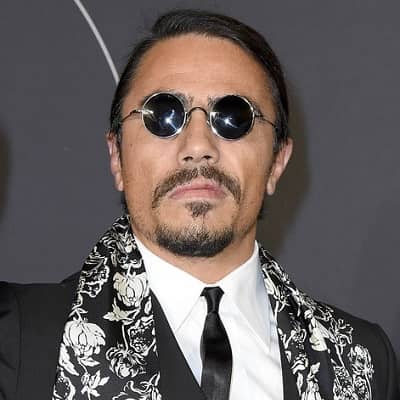 Before he has had affairs with Mithat Erdem, who was a co-founder of “Nusr-et”. Likely he is also said to be dating Ferit Şahenk, CEO of Dogus group in the past. But much information regarding it isn’t available.

He posted n photo on his Instagram showing him with a total of nine children and the caption “the man who does not spend time with his family is not a real man.”

They may be their own sons or nieces and nephews, or even the kids of some of his close friends. However, the exact details are yet to be revealed.

Who is Salt Bae?

Nusret Gökçe popular as Salt Bae is one of the Turkish butcher, chef, and restaurateur.

He owns his restaurant Nusr-Et and has established a chain of steak houses in different countries. He became popular after his technique for preparing and seasoning meat went viral on the Internet.

The chef was born on August 9, 1983, in Paşalı, Turkey, and grew up in the coastal town of Darica, outside of Istanbul. His real name is Nusret Gökçe.

He belongs to Turkish nationality and is of Kurdish ethnicity.

Talking about his education, he completed his schooling from Faik Şahenk İlkokulu.

Salt Bae has been heavily involved with charitable work, such as building a school in his hometown of Erzurum. Nusrat became viral from his video, “Ottoman Steak”, which was posted on 7 January 2017 on his restaurant’s Twitter account. It received 10 million views.

Further his videos were widely known through a series of viral Internet videos and memes which show him “suavely” cutting meat and sprinkling salt.

He was then dubbed “Salt Bae” due to his peculiar way of sprinkling salt. His style was dropping the salt from his fingertips to his forearm and then falling onto the dish.

Gökçe also has toured countries Argentina and the United States between 2007 and 2010. He has worked in local restaurants for free to gain experience as a cook and a restaurateur.

As of 2020, his restaurant has branches in Abu Dhabi and Dubai in the United Arab Emirates; Doha in Qatar; Ankara, Bodrum, Istanbul, and Marmaris in Turkey.

Likely he also established it in Saudi Arabia, Jeddah, in Mykonos, Greece, and then in Miami, New York, to Boston in the US.

However, his restaurants and establishments have received various mixed reviews. Some commented about its positivity whereas some have criticized it very badly too.

Just in September 2020, his restaurant located in Boston was closed by public health officials regarding the pandemic periods. It opened later after applying the COVID-19 safety standards.

He had made a fortune from the restaurants he had built over the course of 10 years. Further, he has established Nusr-rat’s branches in different locations around the world.

The dishes served at Gokçe’s establishments have received mixed reviews and it has rose various controversies.

Many of the professional reviews were generally negative. The restaurant was also called “Public Rip-off No. 1” by New York Post’s Steve.

Further, Gokce also receives criticism when he poses in front of an image of Fidel Castro in December 2017.

Furthermore, in September 2018, Gokçe was criticized by Marco Rubio and Miami city council after Venezuelan president Nicolás Maduro dined at his Istanbul restaurant, with Rubio calling Gökçe a “weirdo”.

Furthermore, in November 2019, four of the former employees accused Gokce of getting a share of their tips. The employees also added that they were fired when they tried to ask questions about the tips.

Likely, his Facebook page also holds around 1M followings. Furthermore, he has his own YouTube channel titled, The Art of Salt Bae with 351K subscribers.

YouTuber Shane Dawson puts up his Studio City estate for sale for $ 1.7 million!