Sam Asghari is engaged to Britney Spears in September 2021. They started dating in the year 2016.

Britney is pregnant with Sam’s baby.

In November 2016, he posted a picture with Britney on a Sushi date. On 2nd December, he celebrated the 38th birthday of Britney. 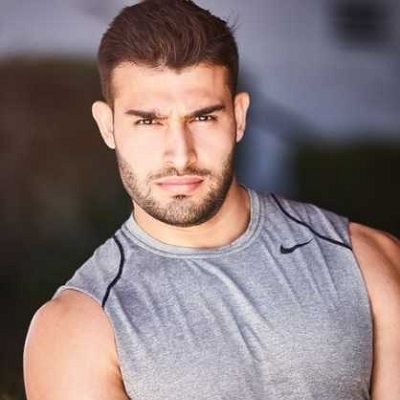 Who is Sam Asghari?

Sam Asghari is an Iranian model and a fitness trainer. He is the boyfriend of American singer and actress Britney Spears.

As of 2019, he attended the 2019 Daytime Beauty Awards in Los Angeles with the Popstar, Britney Spears.

Sam Asghari was born on 23rd March 1994 in Iran. He is the son of Mike Asghari and Fatima Asghari of Persian heritage.

When he was a teenager, his father and mother moved here to the USA from Iran. Sam has three sisters Farzaneh, Maddy, and Ellie. His sister Farzaneh is a nurse and made her catwalk debut at Los Angeles Fashion Week.

Similarly, he played football at the University of Nebraska in Lincoln in Lincoln, Nebraska.

Sam Asghari started his career as a model when he met fashion designer Michael Costello through his sister Faye.

He has a perfectly built body that caught the attention of several modeling agencies and has been covered in many famous magazines like Muscle and Fitness.

Sam has worked as a personal trainer at Royal Personal Traning until the year 2015. His first runway show was in Palm Springs and he was eventually signed by Toyota. In 2016, he appeared in the Toyota Super Bowl Commerical.

In the year 2016, he became the new face of Under Armour and represented the super-popular athletic apparel line for the winter campaign.

Sam has made an appearance in the music video of Fifth Harmony’s Work From Home and Britney Spears Slumber Party.

In the year 2018, he made his film debut in Unbelievable.

Talking about the scandals, in January 2018, Sam and Britney Spears was rumored to be engaged.

Sam Asghari has dark hair and brown eyes. He is 6 feet 2 inches tall and weighs around 89 kg.

In the year 2017, Sam got his mouth right and tight with an expensive procedure to fix his gnarly mouth. According to his social media, he paid a visit to L.A. cosmetic dentist Dr. Kam Kamanger to get his teeth fixed.