Talking about the relationship status of Sam Cassell is a married man.

He is married to Tonya Cassell. There is no information on when and how their relationship started. However, the couple is living happily as there are no rumors of their separation or an extra-marital affair.

Previously he was in a relationship with Ananda Lewis in the year 2006 but due to some reason their relationship eventually broke up. 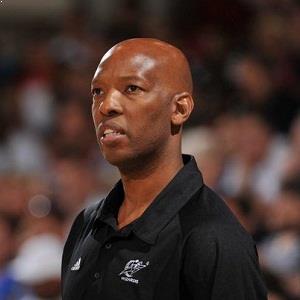 I make big shots everywhere. I get accustomed to it. I'm not afraid to be the goat. I don't worry about what you (reporters) say about me in the papers. In fact, I like it. It tickles me

Tim Thomas is about excuses. It's always somebody else's fault. He said I was jealous? He should thank me for helping him get that contract. He said I didn't show? They traded me, they traded Ray, they traded Big Dog [Robinson] and Tim Thomas still wasn't the man on that team. Michael Redd became the man there. I think I'm doing quite well for myself here. Right now, he needs to focus on his game. Right now, he's not a good basketball player. And I like Tim Thomas. He just has too many damn excuses.

Who is Sam Cassell?

Sam Cassell is best known for his outstanding performance in a game since 1993 being selected by Houston Rockets. He is currently an assistant coach at Los Angeles Clippers.

An assistant coach Sam Cassell was born in Baltimore, Maryland. He was born on 18 November 1969. He is of African-American ethnicity and has an American nationality.

He studied at Paul Laurence Dunbar and after graduating he attended Maine Central Institute in Pittsfield, Maine. For further study, he joined San Jacinto College in Huston, Texas but moved on to Florida State University in Tallahassee.

Reflecting on the career journey of Sam Cassell, he started playing basketball professionally after being selected by Houston Rockets in the 1993 NBA draft.

In his two seasons in Rockets, he helped the team to win back-to-back championships but in his third season, Seattle SuperSonics defeated them.

He was traded to Phoenix Suns but in the same year, he again got traded to Dallas Mavericks during the 1996-97 seasons. On 17 February 1997, he was traded to New Jersey Nets and he lived in Teaneck, New Jersey.

Although he was offered to return to Rockets, he re-signed a six-year contract with the Nets but got traded to Milwaukee Bucks on 11 March 1999.

During the 40th Anniversary Celebration of Bucks on 28 March 2008, he was honored as one of the 20 greatest players in the Milwaukee Bucks.

On 28 February 2008, Clippers reached out to a contractual buyout agreement and sent him to Waivers. On 3 March 2008, he became an unrestricted free agent and joined Boston Celtics. After playing a year for the Celtics, he retired in May 2009.

On 21 May 2009, he became the assistant coach of the Washington Wizards.

Sam Cassell: Salary and Net Worth

His success in his career path has paid him well financially making his net worth estimated to be $23 million as of 2022.

He is rumored to be joining Houston Rockets as a head coach.


Sam has a height of 6 feet 3 inches and weighs 84 kg. His hair color is dark brown and his eye color is black. His shoe size is unknown.

Also get to know more about the birth facts, education, career, net worth, rumors, height, and social media of different personalities like Latrell Sprewell, Anthony Davis, and Jalen Green.

Explore about Tom Cassell’s, A journey from a normal school boy to comedic gaming vlogger !!