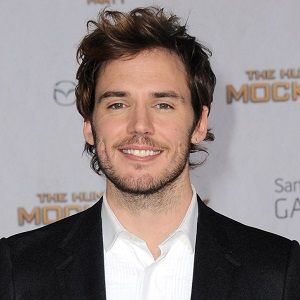 I do just genuinely believe Chris Hemsworth is a 6'3, more muscular version of me. And more handsome, but I try.

When I was in high school, I was a bad singer. I mean, all my early acting was musical theatre, and my first ever show was 'Jesus Christ Superstar.' Everyone's familiar with it. I played priest number 3 and sang so out of tune that it's not even funny.

I always try to be true to who I am and just be myself.

Sam Claflin is a married person. He is married to Laura Haddock. She is an actress. The couple tied the knot on July 30, 2013. The couple is blessed with two children. Their first was born in January 2016 and recently they welcomed their second baby who is a girl in February 2018.

They also stated that they had been dating since 2011. Besides this, he hasn’t publicized his past history as well as future plans.

Who is Sam Claflin?

Sam Claflin is an actor who belongs to British community. His famous roles are Finnick Odair in The Hunger Games film series, Philip Swift in Pirates of the Caribbean: On Stranger Tides, Will Traynor in Me Before You, Alex in Love, Rosie, and Philip in My Cousin Rachel.

Sam Claflin was born on 27th June 1986 in Ipswich, Suffolk. His father’s name is Mark who is a former finance officer, and his mother Sue Claflin was a classroom assistant. He has three siblings named Benjamin, Daniel, and Joseph. When he was young he was interested in playing football. Besides this, he hasn’t mentioned about his birth facts as well as childhood.

Claflin had graduated from  Costessey High School, where he had pursued acting. Then he became the member of the Norwich City School of Excellence. Likewise, he took up Performing Arts at Norwich City College in 2003 and then attended the London Academy of Music and Dramatic Art, from which he graduated in 2009.

While moving towards his career, he had started in 2010. He had first appeared in two television miniseries in The Pillars of the Earth as Richard and in Any Human Heart as young Logan Mountstuart. The next year, he was cast in Seventh Son but dropped for unknown reasons and was replaced by Ben Barnes. He had also cast in the lead role in Hammer Films’ The Quiet Ones in 2012. The movies were filmed in mid-2013 and were released in April 2014. Similarly, he had announced that Claflin had been cast as Finnick Odair in The Hunger Games film series, starting with The Hunger Games: Catching Fire in the same year.

In 2013, he had released a general acclaim and Claflin’s portrayal of Finnick received positive reviews. He had also reprised the role in The Hunger Games: Mockingjay – Part 1 in 2014 and Part 2 in 2015. He had also starred in Me Before You and The Huntsman: Winter’s War in 2016. In 2017, he played My Cousin Rachel, Journey’s End and Adrift, Red Shoes & the 7 Dwarfs, The Nightingale in 2018. Similarly, he is currently working on his new film The Corrupted which is going to be released in 2019.

During the short period of his career, he has been nominated for many titles but has won only one of them. He has won the title of Man of the Year in 2014.

Sam Claflin: Salary and net worth

He hasn’t mentioned about his salary but his net worth is $6 million.

Sam Claflin has suffered from rumours and is a controversial person. His recent activities show that he would be in the new film was denied by his spokesman which was all his fault.

While moving towards his body measurement, his weight is 83 kg, height is 180cm. Besides this, he has light brown hair color and green coloured eyes.