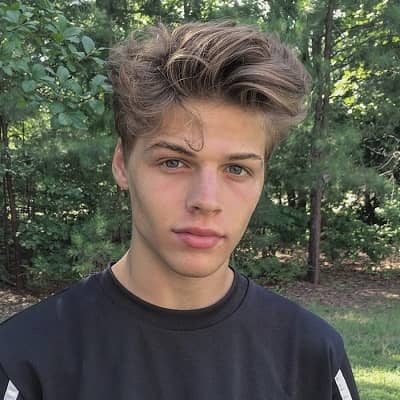 What is the relationship of Sam Dezz?

Currently, Sam is in a relationship with Brooke Monk, a fellow TikToker and Youtuber. They often share pictures together cheering and enjoying their company.

Who is Sam Dezz?

Sam Dezz is an American social media star, Instagram star, and Tiktok Celebrity. He is famous for his lipsync videos, humor, and crazy dance moves. He is renowned on Tiktok with over 4.4M followers.

Sam Dezz was born on December 5, 2001. He hails from California, United States. As of now, he has celebrated his 20th birthday.

There are no specifics on his parents and relatives. Likewise, he grew up in California with his younger brother Joe and an older sister, Hannah. His sister has appeared in one of his videos. Similarly, his family later moved to Virginia. He can fluently speak English and Spanish.

Moreover, Sam’s nationality is American and his ethnicity is mixed.

Speaking of his education, he attended Canyon Crest Academy in California. He is currently pursuing his graduation from George Mason University.

Sam started his social media career with a huge interest and passion. When he began uploading content on youtube in 2017, there were not many views on his videos but he kept on going and achieved fame. He joined the Sunset Park group that posted a variety of entertaining content like cringe-worthy pranks and challenge videos on YouTube.

In TikTok, he got hype for his lipsync videos, humor, and crazy dance moves. Currently, he has around 4.4 million followers on his Tiktok account. Moreover, he posted a picture on Instagram alongside soccer star Andrea Pirlo in May 2017. In March 2022, he joined the Hype House and left in June 2022.

Sam has not won any awards yet. However, looking at his talent, he might win some of them in the future.

Dezz is estimated to have a net worth of about $500k-$1M. The major source of his income is his online platforms. Also, he earns a good amount of money through brand endorsements, sponsors and advertisements.

Sam has not made headlines for any rumors or controversies yet.

Dezz is a handsome guy with great charm and boldness. He is a good-looking guy with a height of 5 feet 7 inches and weighs around 67 kg. His hair color is dark brown and his eyes are blue.