Sam Heughan is a Scottish actor and President for a blood cancer charity. Sam's chemistry with his on-screen actress, Caitriona Balfe of the show Outlander has confused the fans! However, Sam and Caitriona are not dating. 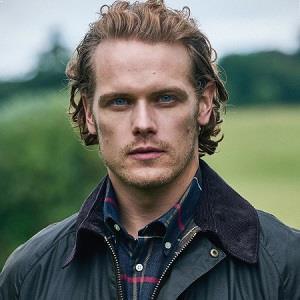 I never once dreamed of sort of being able to be in an American TV series, you know? It was all about theater and touring and sort of being an actor around Scottish theater.

People forget actors can adapt and change their appearance. In this industry, people sometimes cast to type, or as close to type as possible, but actors are a lot more versatile than you think!

You do have to learn how to wear a kilt, and it's certainly very liberating and very freeing, but surprisingly very comfortable to wear, to ride a horse in a kilt. I was surprised by that.

Shakespeare language is fantastic, and to be honest, you don't need to do anything to Shakespeare.

Sam Heughan is in a relationship with American actress Mackenzie Mauzy. They began dating in November 2016. He celebrated his 37th birthday in South Africa alongside his girlfriend Mauzy.

Previously, he dated an American actress Cody Kennedy in 2014. Moreover, he loves whiskey and likes to remain fit.

Who is Sam Heughan?

Sam Heughan is a Scottish actor. Sam Heughan Sam Heughanis mostly known for his role as Jamie Fraser in the Starz series ‘Outlander’.

Sam Heughan was born in Balmaclellan, the United Kingdom on April 30, 1980. His mother is Chrissie Heughan but his father’s name is unknown.

He was always interested in acting since his childhood years. He is of Scottish nationality and he belongs to a Scottish ethnic background.

Later, he attended James Gillespie’s High School for a year and then moved to the Edinburgh Rudolph Steiner School till the end of the sixth year.

He also enrolled at the Royal Scottish Academy of Music and Drama in Glasgow and graduated in 2003.

In 2004, Sam appeared in the TV Mini-series ‘Island at War’ as Philip Dorr. Additionally, he played the role of Andrew Murray in the 2005 TV series ‘River City’. Since then, Sam has appeared in numerous other movies and television series. All in all, Sam has more than 15 credits as an actor as of now.

Some other movies and television series that he has been part of are ‘When the Starlight Ends’, ‘Emulsion’, ‘Heart of Lightness’, ‘Any Human Heart’, ‘First Light’, ‘Doctors’, ‘Breaking the Mould’, ‘Party Animals’, and ‘The Wild West’ among others. In 2013, he was cast as Jamie Fraser on the Starz period drama series ‘Outlander’.

Some of the theatre work that he has been part of ‘Outlying Islands’, ‘The Vortex’, ‘Romeo and Juliet’ and ‘King John’ among others. Additionally, he became a patron for YTAS (Youth Theatre Arts Scotland) in August 2014.

He was also named Barbour’s first Global Brand Ambassador in 2016. In addition, he also has his own charitable foundation ‘My Peak Challenge’ since 2015.

Sam Heughan has 4 wins and 9 nominations to his name for several awards in his career.

He received two nominations for the Saturn Awards for the show, Outlander. Additionally, he also garnered the Laurence Olivier Award for Most Promising Performer nomination in 2003.

He garnered the Saturn Award nominations in 2015, 2016, and 2017. Furthermore, he won the IGN People’s Choice Award in 2015. Some other awards that he has won are Gold Derby TV Award and TV Guide Award.

What is the net worth of Sam Heughan?

Sam has an estimated net worth of $ 5 million. His income for the show Outlander is $100,000 per episode.

Sam Heughan supports blood donation and is the Scotland President for blood cancer charity Bloodwise. For the awareness of his cause, he also participates in marathons and a triathlon.

Moreover, he raises funds and makes time to participate in the programs which are related to it.

Sam became part of a controversy after his girlfriend Mackenzie was the target of online bullying after she posted a photo of Sam online.

This was because the fans wanted him to date, Caitriona Balfe, instead. Additionally, he also became part of a controversy after the ‘Outlander’ star and writers clashed over a controversial book change.