Sam Hyde is tight lipped when it comes to his private life. Sam is possibly single and has no girlfriend. He is solely concentrating on his career and stays low key and doesn’t much talk about his life. Likewise, his gender orientation is male. 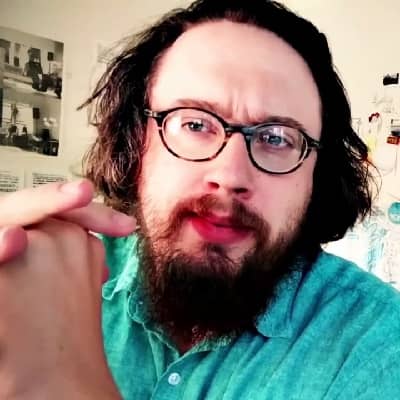 Who is Sam Hyde?

Sam Hyde is a famous American comedian, writer, performance artist, and actor. He is the co-founder of the comedy group Million Dollar Extreme (MDE) along with Charls Carroll and Nick Rochefort. Hyde is popular for his sense of humor, public pranks. and internet hoaxes.

There are not many details of his private life. He is good at keeping things to himself and is not a fan of opening his personal details to the public. Hyde has also not talked bout his siblings if any.

He is of American nationality and his birth sign is Aries.

As per his academics, he graduated from Wilton High School before joining Carnegie Mellon University. He then went to the Rhode Island School of Design and graduated in 2007 with a Bachelor of Arts in film, animation, and video.

In 2014, he started a web series Kickstarter TV and in August 2016, he co-wrote and appeared in Million Dollar Extreme Presents: World Peace along with Charls Carroll and Nick Rochefort.

In the year 2022, iDubbbz uploaded a documentary on Sam to understand and communicate with him. He is mostly popular for his sense of humor, public pranks. and internet hoaxes. Moreover, he appeared in KSTV, Happy World Daddy, HydeWars, Theatre of the Aire, Ecstasy of Car, and Perfect Guy Life.

He also has youtube where he uploads several comedy videos. Moreover, he published the book How to BOMB the U. S. Gov’t: The OFFICIAL Primo(tm) Strategy Guide to the Collapse of Western Civilization.

There are no records of him winning any awards on the internet. Therefore, it is possible that he has not yet won any awards or nominations.

Sam has made himself a hefty amount of money from his career as a comedian and actor. He has not divulged his financial status to the public.

Hyde has been controversial throughout his career. Since 2015, he has been the victim of several misreportings including mass shootings and terrorist attacks by internet trolls. The New York Times distiguished “Sam Hyde is the shooter” as “an identifiable meme” when the photos of Hyde brandishing a semi-automatic weapon appeared many times in social media.

His image was also mistakenly included in the coverage of the Umpqua Community College shooting by CNN. Hyde has been falsely affiliated with high-profile shootings such as the Orlando Night Club shooting, Sutherland Springs church shooting, and the Las Vegas shooting in 2017.

His picture was used as the “Ghost of Kyiv” in social media posts including Adam Kinzinger. Recently, In July 2022, he was again falsely taken as a gunman in the Assassination of former Japanese Prime Minister Shinzo Abe.

Hyde is 6ft 3 inches tall and has green eyes and brown hair. Other body measurements such as weight, shoe size, and dress size are all unknown.

Singer Dua Lipa celebrates 25th birthday with interesting wishes on Instagram by her loved ones! Relationship timeline of Dua Lipa and Anwar Hadid