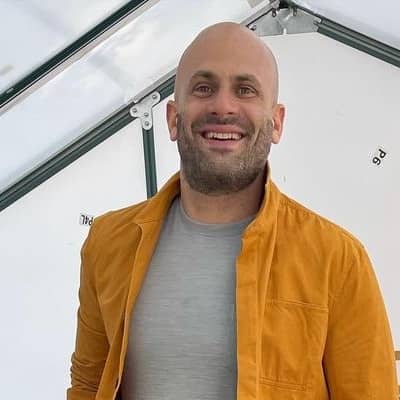 What is the relationship of Sam Kass?

Sam Kass is married to MSNBC television anchor Alex Wagner. On August 30, 2014, the couple tied the knot at Blue Hill at Stone Barns, a restaurant in Pocantico Hills, New York.

Former President Obama and his family also attended the wedding too. The couple welcomed their first child a son named Cy in the year 2017. Similarly, their second son named Rafael was born on the 16th of April, 2019.

Who is Sam Kass?

Sam Kass is an American political advisor, chef, and news personality. He is a former White House Chef and Senior Policy Advisor for Nutrition in the White House.

Kass is the founder of a food technology company, Trove, and operated his chef company called Inevitable Table in Chicago.

The birth year of Sam is 1980 and he is in his 42 as of now. He hails from Chicago, Illinois, U.S. His full name is Samuel David Kass.

Kass is the son of Robert Kass (father) and Valentine Kass (mother). Robert was a teacher at the private, co-ed University of Chicago Laboratory Schools. He also taught President Obama’s daughter Malia Obama in the 5th grade.

Similarly, his mother is a science educator at the National Science Foundation and previously served as the director of Omnimax productions at the Museum of Science and Industry.

He holds an American nationality and belongs to the Jewish ethnicity.

In which school did Sam Kass attend?

Sam completed his high school at the Lab Schools in 1998. During his high school, she was on the varsity baseball team and he also got a scholarship at Kansas City Kansas Community College.

He played baseball as a center field at KCKCC. However, he later transferred to Triton College. Similarly, he graduated from the University of Chicago with an AB in history in 2004.

Sam initially worked at the restaurant 312 Chicago under chef Dean Zanella. He opened his own personal chef company in Chicago, in 2007. The company focused on healthful and nutritious food.

He joined the White House kitchen staff as an Assistant Chef under chef Chris Comerford in 2009 and was eventually appointed Senior Policy Advisor for Healthy Food Initiatives.

In 2003, he was appointed as the executive director of Let’s Move and later promoted to Senior Policy Advisor for Nutrition Policy.

He is the first person in the history of the White House to have a position in the Executive Office of the President and the Residence. On December 8, 2014, he departed from the White House.

Similarly, he is the author of the book titled Eat a Little Better: Great Flavor and Good Health, Better World: A Cookbook.

Is Sam Kassies involved in any rumors and controversies?

Gwen has managed to maintain a clean profile till now. She hasn’t been part of any rumors and controversy that create headlines in the media.

Sam has earned a handsome amount of wealth throughout his successful career. As of 2022, he has an estimated net worth of around $3 million.

He received about $125,000 as the executive director of “Let’s Move” and the senior policy adviser for nutrition policy.

Kass is a partner in Sprig, a meal-delivery service based in San Francisco Bay Area. He invested $45 million in the funding round.

The chef has an athletic body physique.

He stands at a height of 5 feet 8 inches tall with an average weight. He is blond and has brown pair of eyes.