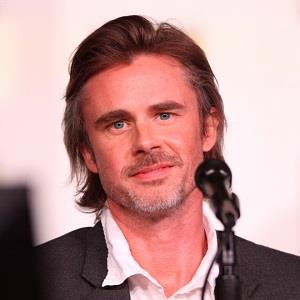 When you get into Louisiana, it really is like a different country in a lot of ways. The plants you see are a little different, like the weeping willows and the cypress trees that come up out of the bayou. And it's steamy hot

I don't get sick of being naked, but the added pressure is staying in really good shape, because naked shape is a different kind of shape than just regular TV shape. Regular, having-your-clothes-on TV shape is intense, but naked TV shape is, I mean, you really have to watch what you eat

When you have kids, for me, it really changed me. I was always empathetic to other children, but now I'm so much more sensitive to children that aren't my own.

Sam Trammell is not a married man till now. He is in a serious relationship with a beautiful actress Missy Yager since a long period of time.

Trammell and actress Missy Yager met in 2003 while performing theater in New York City. They began dating each other back in 2006. The couple had twin sons named Trammell and Winston Trammell in 2011.

They have been together for eleven years now and their relationship is still going well and there is no sign of separation at all. He is very happy with his girlfriend and he is living a happy life with his partner and children. There are no other records of his past and present relationships.

Who is Sam Trammell?

Sam Trammell is a famous American actor best known for his role as Sam Merlotte on the HBO vampire series True Blood. He is also famous for his role as Michael in the 2014 film The Fault in Our Stars. He has appeared in numerous films, television shows, and TV-movies.


Sam Trammell was born on 29 January 1969, in New Orleans, Louisiana, United States and holds an American nationality and is of North American ethnicity.

He is the son of American parents Willis Trammell(father) and Betsy Trammell(mother). He has a brother named Paul Trammell. There is no information about his childhood life.


Sam went to school and high school in Charleston, West Virginia. He studied at the University of Paris and Brown University. He was interested in acting at an early age. Before fame, he worked in theaters for several years.

Sam began his career as a stage actor on the New York stage. He first appeared as a professional actor in the drama Ah, Wilderness! at Lincoln Center. He also starred in Dealer’s Choice, My Night with Reg, If Memory Serves, and Ancestral Voices.

He made his movie debut in 1996, playing Greg Chute in Childhood’s End (1996). The same year, he made his television debut in the film Harvest of Fire in which he played the role as Simon Troyer.

After that, he appeared in many minor roles in several movies and TV films. He got his first big break in 2001 when he was cast in the lead role for the TV film Going to California (2001-2002) in which he played the role as Kevin “Space” Lauglin.

Sam’s another big break came when he landed the role of Sam Merlotte on the HBO series True Blood (2008-2014). He was nominated for Breakout Performance-Male award at the 2009 Scream Awards for his work on HBO’s True Blood. He was also nominated for the Best Supporting Actor in 2010 for his role in True Blood.

Sam has appeared in a number of movies and TV films in his career. Currently, he plays the lead role as Richard Paxson in the television film Cocked.

Sam Trammell: Net Worth and Salary

Throughout his successful career, Sam has accumulated a net worth of 4 million dollars but his salary is unknown.

Talking about the rumors and controversy, he has been in a controversy when he said the Fault In Our Stars will be the uplifting tale for fault in all stars.

Samm has a body height of 5 feet 10 Inches. His body weighs 83kg. He has light brown hair and blue eye. Besides these, his bicep size is 15 inches. Similarly, his waist size is 33 inches and chest size is 43 inches. Besides this, his shoe size is 11 but his dress size is not known.