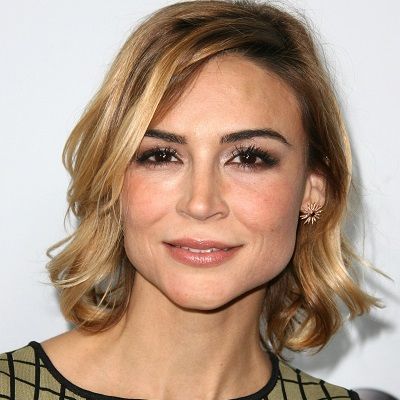 My family is heavily involved in the Marines and close-combat training, and I was raised doing Japanese sword training, so I've always been of the mentality that you have to be able to defend yourself.

I feel like if I'm sick, I need flowers. I'm very open about saying what I need from a partner, and he needs to meet those demands.

It's a really scary thing, having your dreams come true and seeing everything you ever wanted happening, getting the attention for it and then not knowing how to handle it properly.

She gave birth to her first child at the age of 32. Her son is Calin Armstrong Christopher in December 2012.

Who is Samaire Armstrong?

Samaire Armstrong is a Japanese-born American actress, fashion designer, and model. Samaire is well-known for her roles in Stay Alive, The O.C., and It’s a Boy Girl Thing.

She has played the role of Elaine Richards in the ABC fantasy-drama Ressurection.

At present, she has worked as Joan in post-production The Office Mix-Up.

Samamaire Rhys Armstrong was born on 31st October 1980 in Tokyo, Japan. She is the daughter of Scottish father Hunter Armstrong and Italian mother Sylvi Sepielli.

Similarly, she lived in Japan for five years and moved here to Hawaii and later to Sedona, Arizona.

He attended Sedona Red Rock High School in Sedona, Arizona. During her high school, she played volleyball for two years.

In the year 2000, Samaire made her TV debut in an episode of the teen drama series Party of Five as Meredith. From 2000 to 2001, she guest appeared in TV show The X-Files, ER, Judging Amy and Freaks and Geeks.

After that, she appeared in That’s Life, ER, Judging Amy, The X-Files, Trash, The O.C. Gramercy Park, NYPD, Entourage,  and Others. She appeared in Numbers, CSI: Miami, The Staircase Murders, Living with Fran, Dirty Sexy Money, and How to Make It in America.

Her recent roles include in Better with You, The Mentalist, Adopting Terror, Sons of Anarchy, Heavenly Match, Ressurection, Stalker, Arrow, Grey’s Anatomy, NCIS, and House on the Hill.

In the year 2001, Samaire appeared as Kara Fratelli in Not Another Teen Movie. After that, she appeared in Would I Lie to You?, Dark Wolf, Stay Alive, and Just My Luck.

She played the role of Jenny in Rise: Blood Hunter which made a box office $2.851 US. Similarly, she played Nell Bedworth in 7.385 million US.

Her ex-boyfriend Jason Christopher has a net worth of $1 million.

Samaire is a brown-eyed-blonde. She is 5 feet 5 inches tall and weighs around 54 kg.