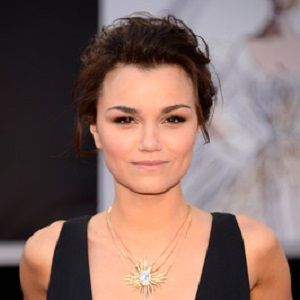 Do everything you can for yourself. Rehearse. Practice everyday. If you can't sing a certain song, sing it and sing it and sing it. Always throw yourself in the deep end and swim as hard as you can to swim up. And that's all you can do--take risks and then work really hard because a certain element of things can be luck, but also the harder you work, the luckier you get. If you want something to happen, don't rely on external things to try to make that happen. Put your best self forward.

It's your job that should inspire you

You can't live up to everyone's ideals. You just have to do your own thing and hope that it's true to the character.

What is the relationship of Samantha Barks?

She has dated Nick Jonas, an American singer for a short time from October 2010 until January 2011. The couple first met on the set of concert movie Les Misérables: 25th Anniversary Concert in 2010.

She then dated This Morning presenter, Matt from Wales in early 2013 for a short time. They had an affair from January 2013 until April 2013.

Then after, she had an affair with a British model, David Gandy from May until October 2013 after separating from Matt.

She was dating an English actor Richard Fleeshman in December 2013.

Who is Samantha Barks?

Samantha Barks is a  singer and actress from Europe. She is popular for her role in Les Misérables as Éponine.

Also, she came into highlight after winning the BBC talent show-themed television series I’d Do Anything the third position in 2008.

This actress was born on 2 October 1990 to her parents Ann and Richard Barks in Laxey, Isle of Man. Her mother is a teaching assistant while her father is a building surveyor.

Besides, at the age of 3, an actress initiated dancing, training in Modern, Ballet, and Tap with Dancers Barre, then Theatrix, Stagecoach Isle of Man, the Manx Ballet Company, and Stage One Drama School.

In which school did Samantha Barks attend?

In discussing her educational background, she joined Laxey Primary School located in Laxey and St Ninian’s High School, Douglas before migrating to London for studying A-levels in Chiswick at The Arts Educational Schools (ArtsEd).

Previously, Samantha Barks recorded her debut album entitled Looking in Your Eyes in April 2007. Also, she appeared in June 2007 supporting the Sugababes and Matt Willis at the Peel Bay Festival.

Another, Barks represented the Isle of Man in the Maltese International Song Competition in December 2007. After then she recorded the song entitled  “Play On”, a hit song in Malta, and “Nothing Else”  from her album.

Moreover, a singer competed in I’d Do Anything in 2008 and finished it gaining the third position. Furthermore, she sang from the musical Wicked entitled “Defying Gravity” in week eight of the show on 29 April 2008.

Another, on 30 September 2009, she launched the new Caly Manx, Manx Ship, in Shanghai, China. Also, during the Christmas Pantomime Season 2009/10, she acted in Aladdin with the title role at the Theatre Royal, Windsor.

Additionally, she appeared in the London production of Les Misérables as Éponine from 21 June 2010 to 18 June 2011 at the Queen’s Theatre. However, she restarted her music career in 2010 recording a song entitled “Let Go”.

In talking about his awards and achievements, Barks received Best Breakthrough Performance at the Elle Style Awards on 11 February 2013.

In addition, she received nominations for the Satellite Award for Best Supporting Actress – Motion Picture. She also was nominated by the cast for the Screen Actors Guild Award for Outstanding Performance in a Motion Picture.

Additionally, she gained a nomination for the Broadcast Film Critics Association Award for Best Acting Ensemble. Also, she shared the National Board of Review Award for Best Cast and earned the Empire Award for Best Female Newcomer.

What is the net worth of Samantha Barks?

This actress earns a decent amount of salary from her successful career but currently has disclosed it to the media. However, she has an estimated net worth of $2 Million as of 2022, which she earns from her profession.

She has been maintaining both her personal and professional life. Hereby, she has not been into any sorts of controversies nither been into any rumors.

Thus, there are currently no data and records available regarding her rumors and controversy.

In discussing her body measurement, Samantha Barks has a slimly built body with a body statistic of 33-23-32 inches, a height of 5 feet 6 inches including a body mass of 53Kg.