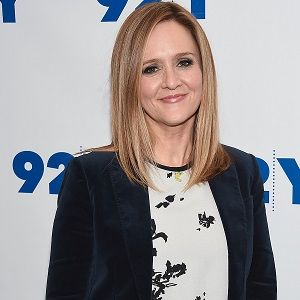 Don't judge me. I made a lot of money.

The best part about poker is there's no down side.

What is the relationship of Samantha Bee?

Beautiful Samantha has an elegant married life same as her professional life. She tied the knot with Jason Jones in 2001. Prior to marriage, the couple was in a successful relationship.

So far, they have maintained their married life elegantly. There are not any rumors of disputes between the pair.

Furthermore, Samantha has not seen anyone in the public and media. Currently, Samantha and Jason are enjoying their company and living happily.

Who is Samantha Bee?

Samantha Bee is a famous Canadian- American writer, comedian, actress, and television host. Furthermore, she got huge recognition after appearing as a correspondent on The Daily Show alongside Jon Stewart.

After serving the show for almost 12 years, in 2015, Samantha launched her own show, Full Frontal with Samantha Bee. In addition, she has also been listed in Time’s 100 most influential people in the world.

Samantha Bee was born on October 25, 1969, in Toronto, Ontario, Canada. She is the daughter of Debra Bee and Ronald Bee. Talking about her childhood, it wasn’t so good as her parents split up soon after her birth.

After that, Samantha began to live with her grandmother, who worked as a secretary at the Catholic school. She belongs to Canadian nationality and mixed ethnicity.

However, she couldn’t continue her study there due to some issues and moved to the University of Ottawa. During that time, she started theatre class and later joined George Brown Theatre School in Toronto.

Samantha began her career as an actress in a theatre. Later, she formed a sketch comedy crew called The Atomic Fireballs alongside three other members.

As a result, Samantha came into the spotlight. In addition, she has also starred in the show ‘The Sailor Moon’ which was featured at the Canadian National Exhibition.

As an actress, the veteran TV host has featured in several movies such as Ham & Cheese, Underdog, Date Night, Love Guru, and much more.

Apart from that, she has also acted in enormous television shows such as The Daily Show, Rescue Me, bounty Hunters, Game On, Good God, and much more.

As she left The Daily Show, Samantha launched her own TV show named Full Frontal with Samantha Bee in 2015. Additionally, she is also the writer and executive producer of the show.

In addition, she has also appeared in another TV show, The Detour in which she is the writer and executive producer.

Besides this, Samantha has also written several books which consist of America (The Book):  A Citizen’s Guide to Democracy Inaction, Bee, Samantha: I Know I Am, But What Are You?, and Bee, Samantha: Cracking Up.

As a successful TV host, comedian, and writer, Samantha earns an enormous amount of money from her profession. Currently, she bags $1 million as her annual salary. As of 2022, she has a net worth of $8 million.

So far, Samantha has achieved a lot that many big names have just dreamt of. She has received many awards and honors in her career. In 2005, she won the Canadian Comedy Award for The Daily Show followed by Coopers’ Camera in 2009.

Samanta has a height of 5 ft inches and her weight is unknown.

Furthermore, she has light brown eyes and blonde hair. However, there is not any information regarding her other body measurements.

Samanta is equally active on social media same as in her profession.

Also get to know more about the birth facts, education, career, net worth, rumors, height, and social media of different personalities like Anthony Bourdain, Éric Ripert, and Noah Galuten.