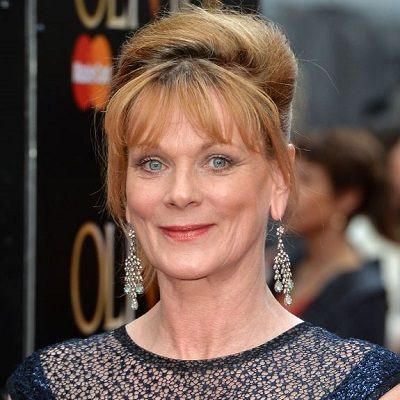 "As for Daniel Craig as Bond, I think it is an absolutely brilliant choice. He is butch, male, attractive and a bloody good actor. He was by far the most plausible choice" [on Casino Royale (2006)].

How long Samantha Bond have been married?

The couple started dating in 1989 and after some time being in a relationship, they decided to get married.

And God gracious, their marital relationship is blissful without any rumors, news, extra-marital affair, or divorce.

Who is Samantha Bond?

Samantha Bond is a popular English actress, perhaps best known for her portrayal of ‘Miss Moneypenny’ in the four ‘James Bond films that starred Pierce Brosnan.

Likely, she is also well-known for originating the role of “Miz Liz” Probert in the Rumpole of the Bailey series. Bond is a member of the Royal Shakespeare Company.

Samantha Bond was born in Kensington, London, England on  November 27, 1961, and she is currently 60 years old. Her father’s name was Philip Bond (an actor) and her mother’s name was Pat Sandys (a TV producer).

Her parents had homes in Barnes and St. Margarets, where Samantha grew up when she was young.

With parents who were both active in the entertainment industry, it was natural for Samantha to have a love for the industry.

However, she did not want to be an actor initially. She held onto that dream until she was 15 years old.

She has two siblings namely, Abigail Bond and Matthew Bond. Samantha holds British citizenship, but her ethnicity is unknown. Her birth sign is  Sagittarius.

Talking about Samantha’s education history, she graduated from ‘Godolphin and Latymer School.’ Following this, she enrolled at the ‘Bristol Old Vic Theatre School.’

During her course there, she started participating in theatrical plays.

Talking about her profession, Samantha Bond made her on-stage acting debut at the age of 21, with a play titled ‘Daisy Pulls it Off.’

The play was staged at the ‘Nuffield Theatre’ in Southampton. In the same year, she also made her acting debut with one of the main roles in the series Mansfield Park.’

In ‘Mansfield Park,’ a TV adaptation of the famous Jane Austen novel of the same name, Samantha played ‘Maria Bertram,’ one of its key characters.

Moreover, in the year 1989, Samantha made her film debut with the comedy-fantasy film titled ‘Erik the Viking.’

In the film, which starred Tim Robbins in the lead role, she played the supporting role of ‘Helga.’ The film was a decent box office success and received some fairly good reviews.

In the same year, she appeared in the key role of ‘Mary Mackenzie’ in the series ‘The Ginger Tree.’

She made a huge comeback on screen in 1995, with a supporting role in the 17th ‘James Bond film, ‘GoldenEye.’

It received positive reviews at the box office and was also praised by critics. Along with making TV and film appearances, she has also been active in the theater scene.

She won Best Actress for Lady M (2017) at Artistic Achievement.

Samantha Bond has a height of 5 feet 7 inches and she weighs is 58Kg.

Her hair color is red and her eyes color is blue.

King Charles III is Reportedly Inviting Prince Harry and Meghan Markle to his Coronation in May, Despite their Netflix Drama!