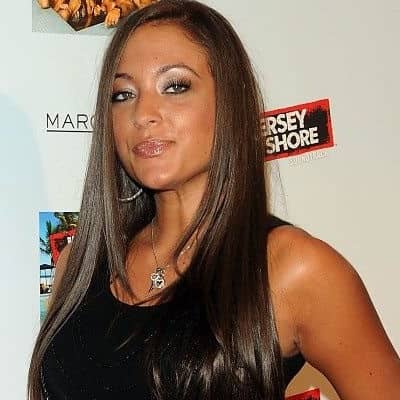 As per the sources, Samantha Giancola’s now engaged to the fiance Christian Biscardi. She and her boyfriend started dating in 2017 and engaged two years later in 2019.

However, due to the coronavirus pandemic, the couple’s wedding was postponed.

Who is Samantha Giancola?

Samantha Giancola is an American T.V. personality, Model, and Businesswoman. She is famous for her MTV reality series Jersy Shore. She is best known as one of the eight main cast members in this reality series.

Samantha Giancola was born on March 11, 1987, in Hazel, New Jersey, United States. She belongs to mixed ethnicity: Italian and Greek. Her father Al Gaiancola is a Senior Signal Engineer at Parsons. And, her mother Angela Giancola is an actress.

In August 2009, Giancola debuted on the MTV reality show named Jersey Shore. And in 2012, She appeared in a film named THE THREE STOOGES. Later in 2017, she appeared on some episodes of SNOOKI & JWOWW and in SPECIAL REUNION ROAD TRIP: RETURN TO THE JERSEY SHORE.

But, in 2018  She announced she would not be a member of JERSEY: FAMILY VACATION.

In 2013, she started her own business in the clothing line“SWEETHEART STYLES“. She became a co-host on the podcast called JUST SAYING in 2015. The podcast Show ran for 104 episodes from August 2015 to November 2017. She also partnered with SXE fitness to release her own line of gym wear and accessories. She launched a fragrance named Dangerous and later she endorsed another fragrance called Dangerous desires.

Besides that, she also earns from her business.

She has hazel eyes with dark brown hair. She stands at a height of 5 feet 5 inches and weighs around 56 kg. Her body measurements are 34-28-37 inches.

Samantha Giancola has stepped out of any controversy and rumors. Hence, she is out of the limelight after she left the JERSEY SHORE REBOOT.

You may also like to read Alice Evans(British Actress), Sarah Bolger(Actress) and Drena De Niro (Actress).