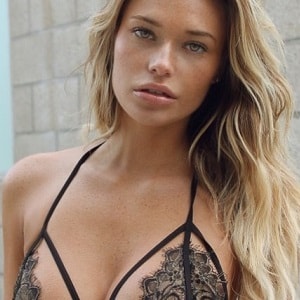 Samantha Hoopes is engaged to Italian entrepreneur Salvatore Palella in July 2018. They first met in the picturesque village of Portofino on the Italian Riviera in June 2017 and they marked one year anniversary with a trip back to the same place they first met, which was in the luxury surroundings of the Bulgari Hotel Milano. Palella proposed her to be his wife.

Who is Samantha Hoopes?

Samantha Hoopes is an American model and she is best known for appearing in Carl’s and Hardee’s Most American Thickburger advertisement and the Sports Illustrated’s 50th Anniversary Swimsuit issue in 2014.

She was born on February 10, 1991, in Doylestown, Pennsylvania. She is 27 years old. She is the youngest of five sisters. Her father’s name is Robert Hoopes and her mother’s name is Theresa Hoopes. She has got four sisters and all are older than her. Her family is into dirt car racing and they have their own race cars.

Her mother did not like speed, racing, and cars. She has got supportive parents and she got help from them to go to California to start pursuing her dream. She holds American citizenship and her ethnicity is Caucasian white.

She was graduated from Central Bucks East High School. She studied modeling and acting from Barbizon Performing Arts Academy. She studied at the branch campus first and then Penn State University and later majored in business.

She wanted to be a gym teacher and team coach. She used to play middle hockey in middle school but not in high school. She was told to focus more on modeling rather than on hockey.

Samantha started her career in 2011 after moving to Hollywood. She made her appearance in the 2014 Sports Illustrated’s 50th Anniversary Swimsuit issue. She worked as a fashion model for ‘Guess’ and for ‘Levi’s Jeans’. She posed for Maxim Magazine in June 2014 and she was ranked 18 for Maxim’s 100 Hottest in 2014.

It was heard a rumor that she was dating American footballer, Russel Wilson in March 2015 as they were spotted in Wilson’s vintage Rolls-Royce convertible car. But, neither of them have confirmed.