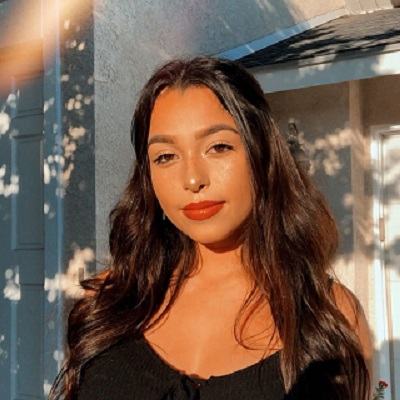 im so proud of me

Samantha Partida’s current relationship status is single. There is no information about her previous relationship.

However, her Twitter tweets suggest that she is bonded romantically.

She shares a strong bond with fellow TikTok star, Alex Guzman as a friend.

Her Instagram posts suggest that she loves to be slicked perfectly and enjoys her free time with nature.

Who is Samantha Partida?

Samantha Partida is an American TikTok Star and Instagrammer. Partida is renowned for her lipsyncs and dancing video on TikTok that went viral on the web.

Currently, she is a partner of the Prod. Bldg. Clothing and Yours Truly and Dollskill.

Samantha Partia was born on the 6th of February 2001 in the United States. She is of Spanish ancestry.

On the 18th of September 2018, she posted her first on Instagram. On the post, she was having a look at the sun in the dusk. The very first post earned 3.2k likes. Following the picture, she posts on the app on a regular basis. Also, likes are increasing manner with every post.

In every, she showcases her talents in fashion and clothing. Her post on the 26th of September 2019, has earned the highest number of likes which happens to be 68k.

In the first TikTok video she posted, she was featured with a fellow TikToker, Sebastian Topete. After that, she collaborated with TikTokers, Christopher Romero, and Giovanny for her second lipsyncs videos.

Soon after that, she started making single TikTok videos, which won the heart of many fans and followers. In the course of the making videos, she had collaborated with TikTok star, Alex Guzman. The video earned 222k likes, and they are showing their cool dancing moves.

Apart from that, she also earns through her merch.

The TikTok star is not been involved in any sort of controversy that creates a buzz in the media.

On Twitter, she is following the personalities like Alissa Violet, Saint Laurent Don, and Goth Angel Sinner.

She also has a self-titled YouTube channel with 5.96k subscribers with 25.8k viewers.