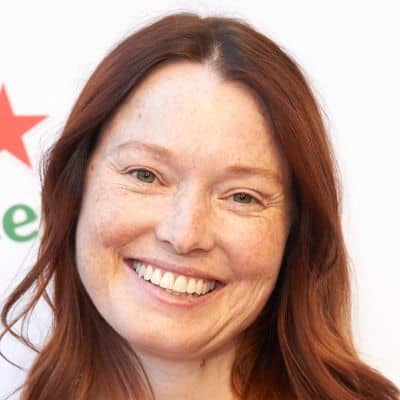 Is Samantha Sloyan Single Or Dating Someone?

According to the reports from different outlets, it is not confirmed whether she has been married or not.

So, we can safely assume that Samantha Sloyan is single at the moment as she has never been the subject of love rumors.

Who is Samantha Sloyan?

She is well known for her appearance in Grey’s Anatomy, Criminal Minds, In the Key of Eli, Midnight Mass, Hush, Parks and Recreation, Castle, and others.

In 2022, she is stealing the headline after appearing as Shasta, in the Netflix series, The Midnight Club. It was released on October 7, 2022.

Samantha was born on January 4, 1979, in Los Angeles County, California, United States. As of 2023, she is 44 years old and her birth sign is Capricorn.

Likewise, her nationality is American, and belongs to the Caucasian ethnic group.

She was born to her father, James Sloyan, and mother, Deirdre Lenihan. She also has a brother named, Dan Sloyan.

As per the sources, it is known that she is a high school graduate, but the name of the institution is not known yet.

In 2003, she was cast as a florist in the feature film, My Life with Morrissey. Then, she went on to work on short dramas and movies like Autodoc, Shamelove, and No Shoulder.

In 2009, she herself produced and acted in the short film, Plus One. Then, Sloyan made gues-appearance in tv series such as The Forgotten, NCIS, Law & Order: LA, ShondaLand, Castle, Parks and Recreation, Rizzoli & Isles, and The Beast.

The beautiful actress went on to work on other short films like Tape 407, Key of Eli, and the tv movie, Murder in Mexico: The Bruce Beresford-Redman Story.

Currently, in 2022, she is soaring to fame again, after appearing in the lead role of Shasta, in the American horror series, The Midnight Club.

On October 7, 2022, the first season of the series was released on Netflix airing its 10 episodes. It was created by Mike Flanagan and Leah Fong and is based on Christopher Pike’s novel of the same name. Other elements from Pike’s books also have been featured in the series.

Talking about her upcoming project, Samantha Sloyan will be seen in the drama series, The Fall of the House of Usher. It is set to release on Netflix.

The Midnight Club (2022 series)’s star, Sloyan, has an estimated net worth that ranges between $1 Million to $5 Million Approx.

However, the yearly or monthly salary, she is paid is still under review.

Owing to her professional acting career, Samantha has not been part of any sort of rumors or controversies.

She is able to well balance her personal as well as professional life.

Briefing her body features, Samantha Sloyan stands at the height of 5 feet 4 inches while her weight is 58 kg.

Likewise, she has a fair complexion, along with a set of brown eyes and hair.

Furthermore, there is also an unverified Twitter account under her name which was created in November 2015. It has been able to garner only a few followers.