Samantha Torres is married to Joe Wallace. To date, she has not shared any details about her wedding.

Together, they have twins children; Elijah and Isabella.

Previously, she has in a relationship with the actor, Dean Cain. They started dating in 1998. After dating for a year, she parted way with each other. 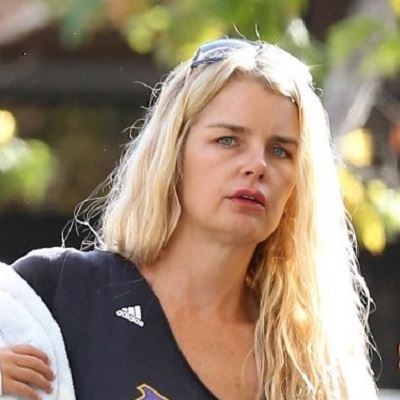 Who is Samantha Torres?

Former Miss Spain Samantha Torres is an actress and model.

Samantha Torres is renowned as the Playboy Playmate for the month of December 1995.

Samantha Torres was born on the 6th of October 1973 in Ibiza, Balearic Islands.

She is of mixed (Galician, Catalan, Spanish, and Portuguese) ethnicity.

To date, she has not shared any details on her family background regarding her mother, father, and siblings.

Talking about her educational background, she attended a boarding school in London for three years. However, details on the school are not available.

In 1992, Samantha Torres became nationally wide famous after being crowned Miss Spain. Year, she also represented her country in the worldwide beauty pageant, Miss World 1992. Also, she represented Spain in Miss International too.

After that, she started her career as a model. Within no time, she became famous in the modeling world in overall Europe. At the time, she has graced numerous numbers of magazines with her presence.

Also, she has led various advertising campaigns. In December 1995, she was named the Playmate for Playboy Magazine. Later, in April 1996, she has featured on the cover of the magazine.

She stands at a height of 5 feet 9 inches and weighs around 59 kg.

She has always been in the headlines for her relationship with his ex-boyfriend, Dean.

The former couple has fought a custody battle for their son, Christopher. After 18 months of battle, Dean was awarded joint custody of their son in 2003.

During the custody battle, she claimed that Dean was unfit to be a father.

After the lost and nasty battle, in 2011, the court granted the full custody of their son, Christopher to Dean.

In the 1990s, there were rumors that she was romantically linked with the Spanish singer, Enrique Iglesias. She has never confirmed the rumors.

You may also read the bio of Fernanda Tavares, LisaRaye McCoy, and Kassie Lyn Logsdon.