Updated On December 18, 2022 | Published By: Gillian
Share this
Married 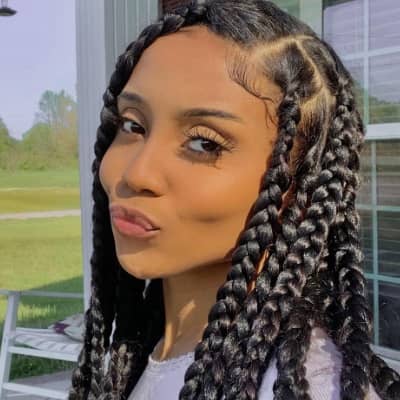 With whom was Samaria Jefferson married?

The most exciting feature of their relationship was when she gave birth during her husband’s Super Bowl LVI game. Her hubby also won the game after only 2 hours, and he was holding their son’s arms.

How many Children does Samaria Jefferson have?

Van and Samaria have three children together. Their first kid, a daughter named Bella, was born in 2016, and their second child, a son named Vanchi, was born in 2017. Similarly, Champ, the couple’s third child (and second boy), was born on February 13, 2022.

Who is Samaria Jefferson?

Samaria Jefferson is a well-known and well-liked American celebrity wife, mother, and influencer. She is also well-known as the wife of renowned National Football League (NFL) player Van Jefferson. She rose to prominence when her spouse achieved fame and recognition in his field.

She hasn’t spoken about anything about the project she’s now working on. She has collaborated with and supported businesses such as Shein Kids, ASOS, and The Black Travel Club, among many others.

Samaria Jefferson was born on July 7, 1998, in Brentwood, Tennessee, USA, and is now 24 years old. Her given name is Samaria Stewart, and she was born with sign Cancer. She is of American nationality and of the Afro-American race.

When it comes to family, her father’s name is Fred Douglas Stewart. Samaria’s mother’s name, on the other hand, remains unknown. She has not disclosed her parents’ occupation on the internet. In addition, Jefferson has a younger sister named Sydney. Similarly, her sister is a social media influencer as well as an event coordinator.

Samaria Jefferson and Van Jefferson her husband both attended Ravenwood High School and are from the same area in Brentwood, Tennessee. She also attended Ensworth School.

Samaria Jefferson works as a social media star and influencer. As a result, she has over 18.7k followers on her Instagram account, @samaria.jefferson. Aside from her own professional accomplishments, Samaria is well-known as Van Jefferson‘s celebrity wife. Her spouse is a well-known NFL football player from the United States. As a result, her spouse is a wide receiver with the Los Angeles Rams of the National Football League (NFL).

Her husband also played collegiate football at Ole Miss and Florida. He was also selected by the Rams in the second round of the 2020 NFL Draft. Speaking about her husband’s professional career, Mr. Van scored his first professional receiving touchdown against the Tampa Bay Buccaneers in Week 11. Similarly, her spouse had six catches for 46 yards in the Divisional Round of the playoffs against the Green Bay Packers.

Furthermore, her husband’s output increased in 2021 while playing under new Rams quarterback Matthew Stafford. Similarly, her spouse had 47 catches, 708 yards, and 5 touchdowns through Week 14. Furthermore, her husband became a Super Bowl winner when the Rams defeated the Cincinnati Bengals in Super Bowl LVI. Van was then placed on injured reserve on September 24, 2022.

Samaria has promoted, marketed, or simply worn clothing and accessories while appreciating the services of many brands, corporations, and celebrities. Shein Kids, ASOS, @reigningbabes, The Black Travel Club, @viral qt, @haleymariemakeup, Najiyyah Tara B., @sydthekid, Zara Kids, Diva Boutique, and Kristen Galbreath are among the companies and personalities she has tagged on her Instagram postings.

As a famous wife and influencer, Samaria Jefferson has not appeared in any films or television programs, indicating that she is not involved in the entertainment business. This is why she has yet to win or be nominated for any honors or accolades.

Despite her absence from these platforms, she remains an active Instagram user with the account @samaria.jefferson. Samaria has 18.7k followers on Instagram and 40 posts. She has shared several photographs with her spouse. She has also shared her pregnancy images and photos of her spending quality time with her children. Samaria just published images of herself and her hubby wishing him a happy birthday on her Instagram.

Samaria Jefferson is a mother of three children who appears young and fit. She has maintained her shape so well that she has a thin figure. Samaria is 5 feet 6 inches tall and weighs 55kg. She also stated that her chest size is 34 inches, waist size is 26 inches, and hip size is 36 inches, therefore her whole body measurements are 34-26-36 inches. On the outside, Samaria has a brown complexion, black hair, and brown eyes.

Samaria Jefferson is a very quiet person who understands how to deal with the media, which is why she has stayed away from rumors and scandals. She has avoided the scandal that may disturb and upset her life due to her privacy in keeping her personal life out of the spotlight.

Samaria Jefferson: Net Worth, An income of 2022

Samaria Jefferson’s anticipated net worth in 2022 is $1.5 million, according to the source. Although she has disclosed her net worth, she has not disclosed any of her other assets. There is also no information regarding her earnings. Her spouse Van Jefferson, on the other hand, is expected to have a net worth of $5 million in 2022.