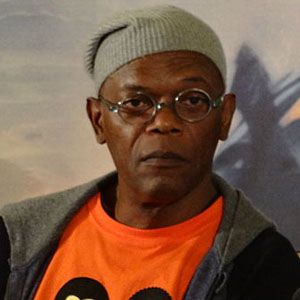 I hope Obama gets scary in the next four years, 'cuz he ain't gotta worry about getting re-elected.

I voted for Barack because he was black. 'Cuz that's why other folks vote for other people - because they look like them... That's American politics, pure and simple.

Not everybody goes to movies to get their life changed.

Samuel L. Jackson is a married man for a long time. He is married to actress and sports channel producer LaTanya Richardson.

The couple first met each other while attending Morehouse College. After a few years of their affair, the couple got married on 18 August 1980.

The couple had their first and only child, a daughter named Zoe Jackson in 1982. Samuel and LaTanya have been married for 37 years now and their relationship is going very well.

Who is Samuel L. Jackson?

Jackson is ranked as the highest all-time box office star with over $4.9053 billion total box office gross. He has also worked as a voice actor in several animated movies and video games. Samuel has appeared in over 100 films to date.

Samuel L. Jackson was born in the year 1948 on 21st December. He was born as Samuel Leroy Jackson in Washington, District of Columbia, USA.

He was born to father Roy Henry Jackson and mother Elizabeth Jackson. This actor grew up as an only child in Chattanooga, Tennessee Jackson. His father died from alcoholism. He only met his father twice during his life.

Jackson was raised by his mother, who was a factory worker and later a supplies buyer for a mental institution. He is an American by nationality and belongs to African-American ethnicity. Besides these, he has not disclosed details about his childhood history.

Jackson attended several segregated schools. He graduated from Riverside High School in Chattanooga. After that, he attended Morehouse College in Atlanta, majoring in biology.

He later switched his major to acting and graduated in 1972. Just before the graduation, he co-founded “Just Us Theatre” in 1972.

Samuel L. Jackson began his acting career appearing in minor roles in plays. After appearing in Home and A Soldier’s Play, he got small roles for the films School Daze (1988) and Do the Right Thing (1989). He also played a minor role in the 1990 Martin Scorsese film Goodfellas.

Jackson appeared in Jungle Fever in 1991 as a drug addict. The film was so acclaimed that the 1991 Cannes Film Festival created a special “Supporting Actor” award just for him. After this role, Jackson became involved with multiple films, including the comedy Strictly Business, and dramas Juice and Patriot Games.

He is ranked as the highest all-time box office star with over $4.9053 billion total box office gross. He has an average of $69.1 million per film. Jackson is set to produce a live-action film adaptation of Afro Samurai. He will also star in the film Unicorn Store.

Samuel Jackson has a net worth of $ 220 Million. He earns an annual salary of $20 Million.

In the 1990s, Jackson was a drug addict. After previously overdosing on heroin several times, Jackson gave up the drug in favor of cocaine. His drug addiction was a major part of his criticism at that time.

After seeing the effects of his addiction, his family entered him into a New York rehab clinic. He was later successfully completed rehab.

Samuel L. Jackson has a height of 6 feet 2.5 inches. He weighs 94kg. He is bald and has a dark brown eye. His body measure 44 inches of chest size, 33 inches waist size, and 17 inches biceps size.

Further, there is no information about his dress size and shoe size.